A WOMAN believes she has a gift for ‘reading’ social situations that are completely obvious to everyone, she has revealed.

Emma Bradford of Leeds is convinced her intuition means she detects subtle interactions others are oblivious to, when in fact they are perfectly aware but keep quiet about it.

Bradford said: “I was at a dinner party and got a strong sense that something was happening between Dan and Sarah. No one else picked up on it, but days later they were a couple.

“Likewise, it was me who spotted that Josh and Ian had fallen out. My sixth sense which alerted me to the silence between them, which everyone else had missed.”

Friend Tom Booker said: “We were all quite aware Josh and Ian weren’t speaking, which is why we did our level best to hide it, and bloody Dan and Sarah were all but shagging on the table.

“The trouble is that Emma sees these things and believes she’s some spookily intuitive seer, instead of having the social skills to pretend to ignore it.”

Bradford continued: “And I sensed Andy was unhappy at work, and sure enough he felt there wasn’t an outlet for his creativity and filmmaking degree at the frozen chicken warehouse.” 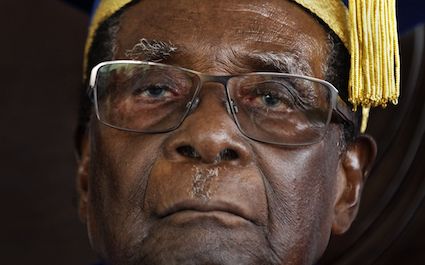 ATTENDEES of the after-work drinks party thrown for  Robert Mugabe have agreed that the atmosphere was ‘beyond awkward’.

Organised by army generals, the party had booked the top floor of a Harare bar but when only seven guests had arrived by 7pm, the manager opened it to other customers.

Standing under a banner reading ’37 YEARS AT THE TOP!’, guests including opposition party members, the South African ambassador and a bishop stiffly attempted small talk while bowls of crisps went untouched.

“I asked Robert if his wife Grace would be coming but he mumbled a vague excuse about her waiting in for a delivery, then joked about how she’d be seeing too much of him from now on anyway.

“By half-eight there were only five of us, so I got him up to give his speech but he was only halfway through before the barman turned the volume right up on Firestarter.

“I went right after that to get my train, but apparently he was there until closing time buying pints for some young colonel.

“God, I hope they weren’t planning a popular uprising or anything. I wouldn’t know where to put my face.”