It’s not about what you think it’s about, say clever people

WHATEVER the public believe things are about, they are actually about something else entirely, clever people have confirmed.

The clever people also revealed that the situation is a lot more complicated than everybody else is prepared to concede, or can probably imagine

Tom Logan, 37, a clever person who lives in London, said: “It is all about context. This morning I burned some toast. The knee-jerk response would have been to blame the settings on the toaster.

“However, when I put my initial emotional reaction aside, I quickly saw that my toast was part of a much wider global picture.”

He added: “My thoughts turned to the underpaid factory workers of China who had made the toaster, the mainstream media that – to serve the business interests of its paymasters – refuses to draw attention to their plight, the smug complacency of a consumer society that turns a blind eye to totalitarianism in return for cheap consumer goods, and the hypocrisy of western governments.

“Suddenly it was clear to me that while I could in no way condone the actions of the toaster, nor could I blame it for what had happened.

“No, the responsibility for the burning of my toast lies not with my toaster, but with all of us – especially you.” 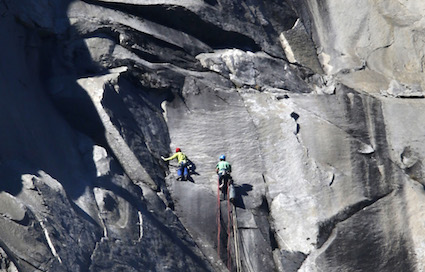 A PAIR of morons scaled a sheer rock face for reasons that make no sense whatsoever.

The two men, who are both Americans obviously, spent 19 days showing off on the side of a mountain, even though no-one cares in the slightest.

Climber Kevin Jorgesen probably said something like, ‘wow, that was totally awesome!’ before being hugged by a bunch of hyperactive weirdos who think watching television is a ‘waste of time’.

His climbing friend Tommy Caldwell would no doubt have added something about an ‘adrenalin rush’ as if that is something you are supposed to be proud of.

The two men will now probably be paid a million dollars to appear in an advert for a car or an insurance company or some chocolate.

Meanwhile, it has been suggested that someone should tell them to get a proper job and stop being such a pair of arseholes all the time.