Jesus to get percentage of Christmas sales revenue

Jesus’s lawyers successfully argued that without Christ there would be no Christmas.

Speaking outside the High Court, Jesus said: “People think I’m coining it because of Christmas but I’ve actually been doing this on Legal Aid.

“Until now, the shops have kept all the money. Amazing isn’t it? But then a lot of innovators die poor.

“I’m not actually allowed to do miracles involving actual money – oh how I’ve tried – and ironically had always struggled to afford Christmas presents.

“Also I live forever, so I need a lot of cash to keep afloat.

“But after this brilliant news I’m going on a huge spending spree. And if anyone’s thinking of getting me something, I’d like the Miranda book please.”

Lawyer Tom Booker said: “Christmas has been recognised as Jesus’s intellectual property, but it’s questionable whether he invented the festival.

“Historical documents show it was someone called Mark who had a struggling shop in Galilee selling aftershave, jumpers and comedians’ autobiographical scrolls.”

English cricketers come out of hiding 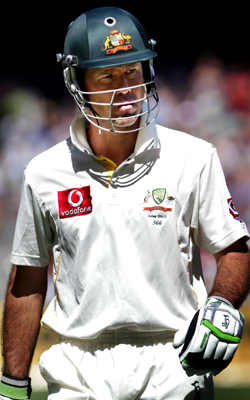 After a career making Englands test bowlers wish they were sufficiently inbred to play rugby, Ponting will travel the country ceremonially handing ex-opponents their arses back.

Ponting said: If that gets boring I might just get dressed up in my full kit, hide behind things and leap out at ex-players to scare the piss out of them.

Flintoff has got his boxing match tonight so I might really shit him up by carrying the round card in a pair of hotpants.

In the past 15 years, players visiting Australia have received a booklet warning of local dangers with photos of redback spiders, box jellyfish and Pontings face.

Ponting is playing in his final test against South Africa but many fear that, like Freddy Krueger or Jason Voorhees, he may reappear just when everyone thinks they are safe to bat out an attacking 50.

Ponting said: I want Nasser, Tufnell and the rest of them know that they can hand their panic alarms back to the MCC.

“Id still keep the number ex-directory if I were them, though, as I might be tempted to ring them in the middle of the night and make the sound of a ball being twatted over the boundary.