Johnson Bans Scotsmen From The Tube

BORIS Johnson is to ban Scotsmen from the London Underground in a bid to make the Tube more bearable for everyone else.

The London mayor said a Scots-free Tube would be less intimidating for ordinary travellers, and would not smell so badly of chips, blood, spilt lager and urine.

He said: "As we all know the Scot is incapable of sitting on anything with wheels attached unless already drunk, or carrying enough booze to knock out an Irish bank manager and his wife for a weekend.

"For god’s sake man. It’s eight-thirty in the morning. You’re only going two stops on the Northern Line to get to your doorway. Do you really need six cans and a hip flask?

"Am I your best pal? I don’t think so. We’ve never actually been formally introduced and it is unlikely that my best pal would be urinating on my foot."

Karen Simmons, of Passengers First!, said it was important London took a strong stand against all forms of Scottishness on public transport.

She said: "I am not your 'hen' and my 'jaiket' looked just fine without the spittle, thank-you."

However, Bob Crow, leader of the RMT union, said his members were not trained to distinguish Scotsmen from other illegal foreigners.

He added: "And what about the Romanians? They’re violent and don’t speak English. How are we supposed to tell them apart?"

Wendy Alexander Goes To Toilet By Herself 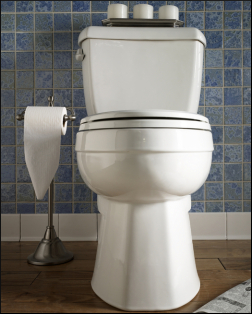 THE Scottish Labour leader Wendy Alexander was celebrating last night after going to the toilet all by herself.

It is understood Alexander got down from the table after dinner and walked purposefully across the hall to the downstairs lavatory.

According to friends of the Labour leader, she pulled down her trousers and pants, climbed onto the seat, steadied herself and then did both, 'a pee and a poo'.

Labour activists in Scotland hailed yesterday's movement as a major step forward for the party, although Alexander did require some help with wiping.

It is the first time the Scottish leader has gone to the toilet unaided. Last year she got half way across the hall and was already pulling down her pyjama bottoms, before falling over and soiling herself in what  one witness described as a 'spectacular explosion'.

Meanwhile Ms Alexander's brother, Douglas, the international development secretary, has recently moved on to Pampers Easy-up Pants and hopes to be using the toilet independently by the end of July.

"It is for her to decide when and how she goes to the the toilet. We wish her luck and hope her new found confidence does not result in shit all over the floor."