A MAN has so many unsightly tattoos that the best option is to colour all of him in with blue-grey ink, a tattoo artist has decided.

Tattooist Wayne Hayes has ruled out the possibility of improving Tom Logan’s tattoos with high quality additional artwork because they are so numerous and all equally terrible.

Hayes said: “Laser removal of this much bad art would be unbearably painful, and there’s no way I can salvage something as naff as a skeleton in a top hat riding a flaming motorcycle.

“The best option is to colour Tom in until he’s a uniform shade of dark grey. It will look odd but will be a vast improvement on his random jumble of Celtic things, barbed wire and wonky cartoon characters.

“When he’s finished he might look quite dignified in a strange way, like a statue. He won’t have to wash as often either.”

Logan said: “I’ve been planning to do something about my tattoos ever since I looked in the mirror one day and thought, ‘Why am I covered in crap drawings?’”

'Tits and Dragons' is a much better name, agrees George R R Martin 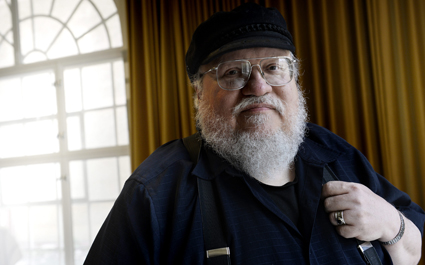 GEORGE RR Martin is to rename Game of Thones as Tits and Dragons, it has been confirmed.

The fantasy author is to re-title the whole series in response to actor Ian McShane’s suggestion, which he described as “beautifully concise”.

“There’s hardly any thrones in it, just that big swordy one, and there aren’t any games because the Xbox hasn’t been invented, so it was a bad title from the start.

“The next book can be called Norks and Wyverns, followed by Big Ones and Basilisks and culminating in Horned Serpents and Hooters.

Struggling fantasy author Nathan Muir said: “Wait. I just had an incredible idea. What about tits on dragons?

“So there’s these big-breasted dragons and they go on some sort of quest, perhaps for a magic gem.

“I’m going to need at least nine volumes to do justice to the Big Tits Dragon Saga.”