THE UK’s last remaining CD tower, capable of holding more than 88 albums, has been destroyed.

Campaigners fought to preserve the final surviving example in Wrexham, a blondewood tower with space at the base for club compilation double CDs, but were overruled after it was declared unsafe.

Campaigner Eleanor Shaw said: “We believe that this one dated all the way back to 1991, based on the pristine copy of Pearl Jam’s Ten in its upper reaches.

The chrome or teak-veneered structures were once common sights across the country, where they loomed symbolically in living rooms. However English Heritage refused to save the remaining examples after already wasting more than £100 million converting CD towers to DVD towers.

Demolition expert Roy Hobbs said: “We can’t afford to be sentimental. At any moment the rack could give way and half the town would be buried beneath The Miseducation of Lauryn Hill.”

Eurovision entrants picked as if for jury service 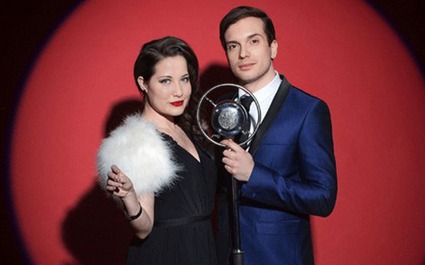 BRITAIN’S Eurovision entrants received a summons letter forcing them to perform, it has emerged.

Artists’ increasing reluctance to perform has forced the move to legally compel random citizens to become a camp musical phenomenon.

A subpoena arrived in the mail for Alex Larke and Bianca Nicholas, who were told that they were now a double act called Electro Velvet and would have to perform in Vienna.

Larke said: “As soon as I saw the letter with the official Eurovision stamp, I broke into a cold sweat.

“I’m seeking legal advice, but it’s been made clear that if I refuse I could face 10 years in prison, or even have to do the Royal Variety Show.

“I imagine this is what virgins used to feel like when told they were to be burned in a wicker man.”

Nicholas said: “They gave me a mini Union Jack, a tacky sparkly dress and a charmless song, now it’s up to me to deliver 12 points, mostly from Ireland.

“Didn’t Morrissey say he would do it? He’s the greatest lyricist of his generation. I don’t even like music.”