Left-handed people admit they're just doing it to be different

LEFT-HANDED people have finally confessed that they do it deliberately for attention.

Everyone claiming to be left-handed has admitted that while they pretended it was natural, they could not help it and it was discriminatory to say they could use their right hands, in fact the whole thing was faked for a laugh.

Fraudulent leftie Susan Traherne said: “It began at primary school, when I had shit handwriting and the teacher was going to tell me off. I blurted out ‘I’m left-handed!’ It snowballed from there.

“I was average height, brunette, not particularly clever or funny. How else was I meant to stand out in year two? I just wanted to be special.

“Overnight I was a key stage one sensation with my yellow-and-green scissors, my special guitar in music lessons, my licence to elbow any kid to my left as much as I liked. It was brilliant.

“But, 30 years on, I’m ready to come clean. Because now I’ve realised there are much easier things to bullshit about for attention, and I’m sick of having to switch hands whenever someone walks in.”

Retired joiner Roy Hobbs said: “I bloody knew it. And I tell you who else is making it up. People who wear glasses.” 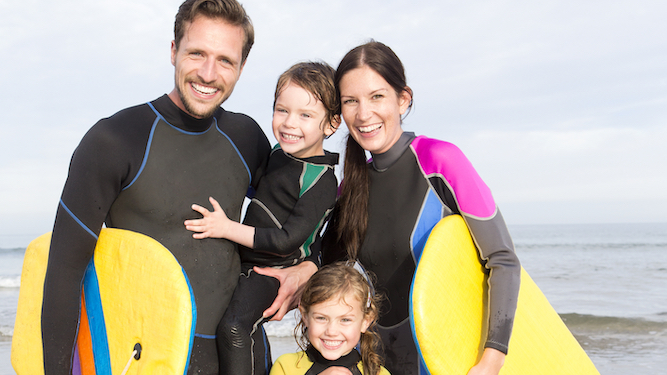 A MIDDLE-CLASS family who returned from Cornwall a fortnight ago are still all wearing wetsuits, friends have confirmed.

The Cooks have been seen gardening, driving, shopping, and visiting National Trust properties while uniformly clad in wetsuits and apparently have no plan to take them off.

Neighbour Helen Archer said: “I saw them over the fence and said hello and over wandered Bronwyn, wearing a wetsuit while raking leaves as if that was perfectly normal.

“Behind her the kids were playing with a frisbee, wearing wetsuits, and as we chatted Julian came home in his Audi A6, carrying his briefcase, wearing a wetsuit. I didn’t say anything. I didn’t want to look stupid. It wasn’t even raining.”

Julian Cook said: “Why are we still in wetsuits? Well first, because other people hire them but we’ve bought ours. I think it’s important everyone know that.

“Second, they let everyone know that we’ve actually had a bloody good beach holiday while being responsible enough to stay in Britain, and that we spent it doing expensive activities like surfing, coasteering and stand-up paddleboarding.