A LIBERAL man is unable to discuss any writers, musicians or historical figures born before 1970 without mentioning that they were racist.

Nathan Muir of Brighton has so far today clarified that Harold Macmillan, Terry Thomas, Dame Thora Hird and John Lennon were racist, that Isambard Kingdom Brunel and Houdini were sexist, and that Sir Arthur ‘Bomber’ Harris was a homophobe.

Friend Tom Booker said: “He has to give you the modern day appraisal, like he’s holding their Top Trumps card.

“I don’t think anyone was surprised that Michael Faraday, inventor of the electric dynamo, was racist given that he was born in 1791, but Nathan has to drop it in before we can move on.

“It’s never worth challenging him. I once questioned whether Florence Nightingale was really a transphobe, and he said ‘Well, in the absence of any compelling evidence that she wasn’t, we must assume,’ and smiled condescendingly.

“Yeah, Nathan, we get it, everyone in the past was a total bigoted arsehole unlike you, the pinnacle of human morality. Now can we carry on with the pub quiz?”

Muir replied: “Yes but you’ll have to write down the answers because whoever invented pens was racist.”

Patrick Bateman tells George Osborne to tone it down a bit 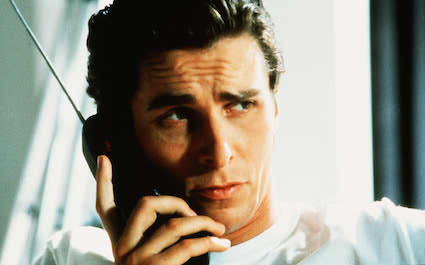 GEORGE Osborne’s investment banker friend Patrick Bateman has told him saying he wants Theresa May ‘chopped up in bags in my freezer’ is a bit creepy.

Bateman, who bonded with Osborne after hours at a New York finance summit in the 1990s, has advised the former chancellor to tone down his violent rhetoric.

He continued: “I met George over Japanese bluefish tuna at Le Bernardin. He was wearing a black Dries van Noten suit over a blush pink Paul Smith shirt with cuffs flecked in dried blood.

“We share similar tastes in music, technical gear, relaxation, hardbodies, recreational extremes and the elimination of certain types of people, but this is not professional.

“I know how he feels about Theresa. I’ve felt that way about a lot of women. But either keep it to yourself or scream it into the ear of an uncomprehending suit in a nightclub while INXS’s New Sensation is playing at deafening volume.

Bateman added: “I’m coming over next month. We’ve got reservations at Alain Ducasse at the Dorchester. Afterwards we’ll do something.”