Lies about plastic surgery up 39%

LAST year saw a record increase in the number of obvious lies about embarrassing surgery scars.

Britain’s cosmetic surgery industry said it had cut open 39% more customers who then came out with some bullshit excuse for why they look like a fish.

Liz Wade, 33, from Stevenage said: “I’m happy with the way I am especially as all this cold weather has made by boobs bigger and firmer.

“And I got this long red mark behind my ear when a gang of sparrows stole the potato peeler out of my hand and then attacked me with it.”

She insisted: “All my family start to get younger when they hit their mid 30s. We’re like Benjamin Button except we have a lot of freak accidents resulting in tiny scars.”

The results also show men are 20% more likely to lie about going under the knife than women. Professor Henry Brubaker, of the Institute for Studies, said: “Men have been secretly experimenting with all kinds of excuses for everything from nose jobs to face lifts in a secret bid to alleviate their awfulness.

“Actually, I recently discovered that keeping my two wallets in my top pockets made me look like I had moobs.”

He added: “I now keep my wallet in my trouser pocket and yes it is shaped like a surgically-enhanced, flaccid 10-inch penis.” 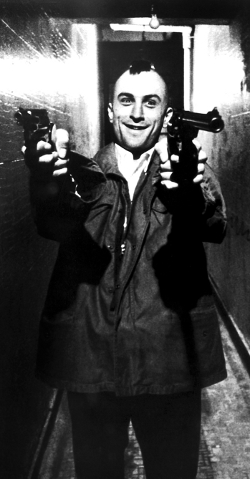 NEW York is bidding to reverse its plummeting violent crime figures by not letting anybody smoke.

But tourism experts say the move will also resurrect the authentic New York atmosphere portrayed in much loved Hollywood classics such as Mean Streets, Bada Bing and Fuck You.

An entire industry once existed based on t-shirts saying ‘I went to New York and all I got was this lousy bullet in the face’ but in the last 10 years more than 40% of tourists have gone home completely unwounded.

Locals have blamed the bullet-free trend on the pernicious influence of Friends and everyone feeling sorry for them after 9-11.

But many now hope that millions of neurotic, nicotine-deprived lunatics forced to live stacked on top of each other will bring back the fucked-up Taxi Driver levels of social interaction, but without lots of annoying tobacco smoke.

New York cabbie Tom Logan said: “Ordinarily I would recommend the cultural highlights and reasonably-priced restaurants in our fair city but after pulling a 12-hour shift without a smoke I’ll probably just spray the entrance to the Waldorf with machine-gun fire and then drive this motherfucker straight off the Brooklyn Bridge.”

New York’s anti-smoking laws are some of the strictest in America, though there is a loophole in the legislation to allow the public smoking of crack.