Literal surnames to be reintroduced

MEDIEVAL-STYLE surnames that describe a person’s job or characteristics are to be brought back.

The move will make it easier to assess someone’s suitability for a job or social interaction thanks to surnames such as Electrician, Accountant, Friendly, Pisshead and Twat.

A government spokesman said: “In the past, someone called John Swift was probably a fast runner. Obviously times change, so now he’d be called John Tubby-Waddler.

“Similarly, someone called John Fletcher would have made arrows. Of course with the decline of manufacturing in the UK and reduced demand for arrows, nowadays he’d be called John Telesales, John Barista or John Jobseeker.

“Surnames even described people’s personalities. For example, the common name Vaisey comes from an archaic term for ‘cheerful’. So you can soon expect to meet people called Peter Arsehole or Rachel Vindictive-Cow.”

The spokesman added that if crime-related surnames, such as Simon Murderer and Barry Insurance Fraudster, had been introduced earlier it “would have saved a lot of police time”.

Office worker Tom Logan said: “I am not looking forward to being renamed Tom Office-Drone, although deep down I know it is completely accurate and slightly preferable to Tom Failure.

“One thing’s for sure, it’s not going to improve my chances with the incredibly attractive work experience girl, Emma Out-Of-Your-League.”

Tattooists asked to switch back to Chinese 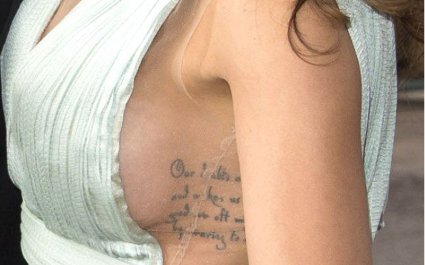 TATTOO artists have been told to go back to using foreign languages by observers horrified by the trite sentiments of modern tattoos.

The trend to have phrases in English tattooed on the body means that anyone who can read is exposed to the numbing idiocy of inspirational quotes.

Salesman Tom Booker said: “In a single trip to the beach I’ve seen men with lines from Gladiator on their biceps, women with Bon Jovi lyrics across their backs and poems rejected from Hallmark cards for being ‘too sugary’.

“The spelling isn’t exact. The grammar is indefensible. And the kerning, oh Lord the kerning.”

Tattooist Wayne Hayes said: “I’m an inker, not a writer.

“When the fashion changed from tribal to words I just transcribed all the motivational pictures that you get on Facebook.

A petition received by the British Tattoo Artists Federation has requested its members to use Japanese kanji, Hindi or even Wingdings if it will stop witless tattoos being legible.

Roofer Stephen Malley said: “My tattoos are any random words that I saw on a wall when I was drunk. I think one, dedicated to my dead dad, might be a quote from Dumb and Dumber.

“Thing is, they don’t annoy me because I can’t read them when I see them in the mirror because they’re reversed.