Living Under A Flyover Is Character-Building, Says Minister

A FEW months sleeping under a flyover and eating discarded banana skins never did anyone any harm, the government said yesterday.

Housing minister John Healey said being thrown into the street could prove to be the making of you and confirmed that all future repossessions would be linked to the householder's level of moral fibre.

Mr Healey has appointed Bill McKay, a retired sergeant major in the Royal Anglian Regiment, to assess people in arrears and decide whether or not they would benefit from a few months in a cardboard box.

Sgt McKay: said: "Look at me when I'm talking to you, you fuckin' little maggots!

"If any one of you fuckin' mummy's boys can't pay your mortgage this month you will get my boot right up your fuckin' homo gayboy arse!

"And don't go crying to the financial fuckin' ombudsman. For the next six months your arse belongs to me, now gimme the keys to your house and then scrub my shitter with this fuckin' toothpick."

Mr Healey will visit Carlisle later today to unveil the new 50-acre 'Trampatarium' situated under the A6 flyover, which features open-air accommodation for over 3,000 recently evicted ghost-fighting pavement dwellers.

He said: "Flyovers, council dumps and railway arches will become the new boot camps of the 21st century where people can lose weight, toughen up and learn how to make informed decisions about mortgage products." 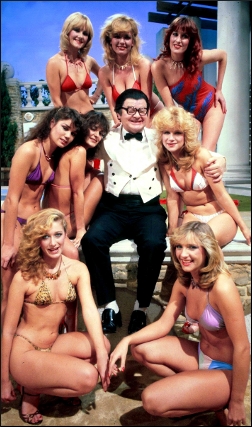 TV presenter Vernon Kaye's missus shouldn't get her knickers in a twist over a bit of saucy fun, Seventies experts said last night.

Her indoors is threatening to give the celebrity host a right rollicking after he admitted sending sexy messages to a bevy of busty lovelies.

But now boffins have claimed it is becoming increasingly difficult for ordinary celebrities to get a bit of the other, especially after that coloured golfer was caught going at it with a load of slags.

He said: "He works bloody hard and the last thing he needs is her going on at him when he gets home. He's got enough to deal with, what with all them bloody immigrants and a Labour government that doesn't know its arse from its elbow."

Professor Varney said that after studying pictures of the fruity crumpet he was forced to make a fist and repeatedly bend his arm at the elbow.

He added: "I don't know much about text messaging, but I know a corking pair of charlies when I see them. Cor blimey, me glasses have steamed up."

However Professor Varney's colleague, Dr Robin Askwith, was more equivocal, insisting Kaye should treat his missus to some perfume and a scampi dinner and admit that he has been a right plonker and no mistake.

He added: "Mind you, if she keeps on about it after that he's quite within his rights to give her a slap. Just a little one though – don't want to upset Mrs Harman and her lezzy pals."