LONDON property prices will plummet because all the rich twats are already there, experts have warned.

As former hospitals, libraries and community centres are bought up and either knocked down or converted into expensive housing, property developers have admitted they overestimated the global supply of gits.

Tom Booker said: “I remember buying my first Bethnal Green orphanage in 2007 and turning it into eight foot by six foot studio apartments starting at £450,000.

“You wouldn’t believe the number of vampiric Trustafarians, junior bankers and wealthy but clueless Spanish Anglophiles I had queuing up for viewings.

“Turns out I’d underestimated the number of people in ordinary jobs earning roughly £26,000 who actually make the world turn.

“So now I’m fucked. Any chance of some sort of bailout? Otherwise I’ll leave the UK and then you’ll be sorry.”

Trump’s running mate to be Wesley Snipes in 'Demolition Man' 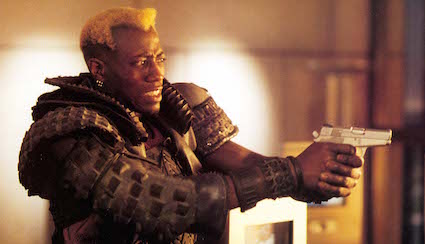 DONALD Trump has chosen a character from the 1993 film Demolition Man to be his vice presidential running mate.

Trump said that if he wins the Republican nomination as expected then Simon Phoenix, a life long criminal who has been cryogenically frozen since 1992, will be unfrozen in late July.

The candidate added: “He will be hard on Mexicans, Muslims and the Chinese. But he’ll also be very good on Twitter.

“And Wesley Snipes has assured me that Simon Phoenix is black, which takes care of all that diversity crap.”

He added: “I drew up a short list including The Man with No Name, Sonny Corleone from The Godfather, Dr Octopus from Spider-Man 2 and Sarah Palin. But Simon Phoenix is the only one I would trust with my life.”

He added: “We’re going to win even if the Democrats somehow manage to unfreeze Sylvester Stallone’s character from Demolition Man.”