THE Daily Mail has called on the government to stop sending money to poor foreigners when it could be used to replace carpets right here in Britain.

In a hard-hitting editorial the paper said ‘British carpets must always come first’ and that most foreign aid was used to build Chinese spaceships.

Meanwhile, the Mail underlined the horrifying extent of Britain’s humanitarian crisis by illustrating its story with a photo of a moist BMW.

Martin Bishop of Didsbury, said: ”I’ve only had this carpet six months and now it’s all soggy. I’m really unhappy, but the government won’t even buy me a new telly.”

His wife Sarah added: ”How many BMWs have to get wet before the government stops trying to impress stupid African babies?”

Professor Henry Brubaker, from the Institute for Studies, said: ”People who don’t have flood insurance either didn’t ask for it, which is mentally defective, or were denied it, which should have caused the first faint stirrings of something being amiss.

”If we are going to use foreign aid money, perhaps we could make a film about how not to buy a house on flood plain.

He added: ”Meanwhile, you can still do your bit for Britain. If you meet someone today who has signed the Mail’s petition, try your very best to urinate on their legs.”

I have a ten-second memory, Pickles repeatedly tells press 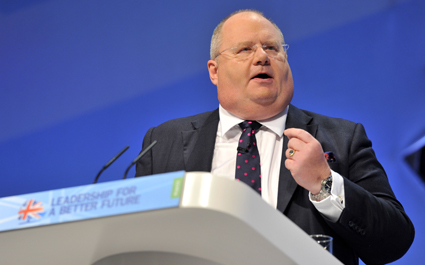 ERIC Pickles has admitted his memory only goes back a fraction of a minute.

After denying criticising the Environment Agency hours after having done so, the Communities minister said his affliction began after being struck on the head by a crate of Memento DVDs.

Pickles said: “My life is a constant cycle of asking ‘what idiot said that’? and then wondering why everyone is staring at their feet looking embarrassed.”

His appointment has caused the creation of a new government post, Chief Reminder To The Minister, whose job is to walk behind him shouting “You are Eric Pickles and you work here”.

Memory problems have plagued the coalition cabinet, with Nick Clegg unable to retain any information once it’s placed in a manifesto and Michael Gove’s recollection of his school days being replaced by the 1939 film Goodbye Mr Chips.