A MAN was forced to quickly shut his living room door after accidentally discovering his flatmate painting Warhammer figurines in the middle of the afternoon.

Tom Logan, who had came home early from work due to illness, quickly apologised from the other side of the door saying he probably should have texted flatmate Wayne Hayes to let him know he would be home early.

Logan said: “It was a little bit awkward to say the least.

“I know he’s single and a little bit lonely, so it’s obvious that he does that kind of thing, but he really should be keeping it to his bedroom.”

Logan said he waited five minutes while Hayes ‘cleaned up’.

Hayes then put the kettle on and the two men acted as if nothing had happened.

Hayes added: “That’s because nothing happened.” 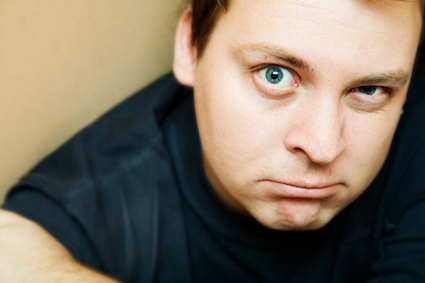 A CLAMPDOWN on internet trolls is forcing them to do their trolling in the real world, they have revealed.

With trolling more likely to be prosecuted under new rules, trolls are having to go through the laborious process of delivering weird, gibbering threats to victims in person.

Teenager Wayne Hayes said: “I’d been planning to troll the unpopular kid at school on Facebook with something hilarious like, ‘Everyone hatez U kill yourself shithead DIE!!!’

“I didn’t want to be prosecuted so I went round to his house and said it to his face. This proved less fun than online trolling because he flipped out and punched me in the testicles repeatedly.

“I’ve no idea how I’m going to meet anonymous YouTube users to tell them I’ve had sex with their mums because we have differing opinions on video games.”

Retired accountant Roy Hobbs said: “Printing out bizarre threats and posting them to every high-profile person I disagree with is costing me a fortune in stamps and ink cartridges.

“I tried going to the Houses of Parliament to make sexist comments to feminist MPs, but the only one I saw was Harriet Harman and she’s fucking terrifying in real life.”