A WOMAN is distraught after finding out her new partner is into wanky necklaces and pendants, she has revealed.

Nikki Hollis is reconsidering her relationship with Tom Logan after seeing him in a necklace type thing that looks like a tiny biscuit on a shoelace.

Administrator Hollis said: “I opened a wardrobe at Tom’s and was confronted by dozens of metal bangles, and other crap like metal dolphins with fake gemstones for eyes on leather cords.

“After inspecting the presentation boxes I realised they all had some laughable gimmick, like a ring made from a small piece of steel from a decommissioned American M-48 tank.

“I didn’t know Tom had all this shit, but with hindsight I should have noticed his cufflinks ‘based on the classic Triumph motorcycle company insignia’.

“I’m not some bigot who thinks jewellery for men is effeminate, but you have to admit a ‘native American-inspired Zirconium eagle charm’ is pretty weird.”

I'm here for the long term, says wasp in kitchen 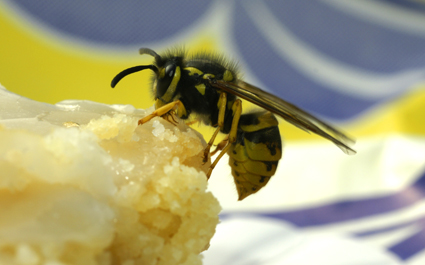 A LATE-SUMMER wasp in a kitchen has reassured the electorate that it is here for the long-term.

The wasp, which insists it has not lost the power of flight, is crawling drunkenly across a table while claiming that a bright future of unlimited sugar lies ahead of it.

It continued: “I’m not one of these wasps who’s around for a single summer and then turns up all crispy and mummified behind a bin. I’m here to stay.

“The long-term plan is I’ll crawl over here, then rest for a bit, then take to the air and buzz around a picnic or something. But I don’t want to reveal my cards too early. I’m clever like that.

“Ultimately all Europe will bow to my majesty, and I will be the immortal wasp ruler and build a global empire of paper that will last for a thousand years. I don’t think that’s an unrealistic goal.”

Householder Tom Booker said: “It’s basically dead but could still give you a nasty sting. Leave it a couple of months.”