Man thinks he gets a lot of emails

UNEMPLOYED Wayne Hayes is under the impression that 12 emails a day is a lot.

Hayes, from Lowestoft, told friends that keeping on top of his various electronic subscriptions and special online offers is exhausting and that he finds himself dedicating the best part of each day to managing them.

He said: “I get them constantly, sometimes three or four in a single hour.

No sooner have I deleted my monthly phone bill, then I get something about a new ITV show that I have to go and read about. If it’s not a blogpost on LinkedIn, it’s an update on a petition about badgers.”

“I go to the kitchen for fifteen minutes to have a bowl of cereal and there’s another new one when I get back. Surely we’ve reached saturation point.”

Hayes said that he had considered deleting his email account, since dealing with a dozen or so emails on a daily basis was taking up all the time and energy that he might otherwise be using to look for work.

“I try to unwind in the evening by playing Elder Scrolls Online for a few hours, but the whole process starts again as soon as I get out of bed the next day at 11.”

Britain to dig massive tunnel for no reason whatsoever 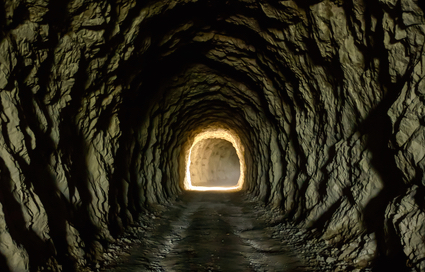 BRITAIN is to dig a tunnel through the Pennines because it was unable to come up with anything else.

The multi-billion pound tunnel will stretch across northern England and create millions of tons of spoil which, experts say, will probably just sit there in a gigantic heap, forever.

“And I suppose you could always have a look down the tunnel, maybe shout something and see what sort of echo it creates. But if you’re really into echoes then there are plenty of existing tunnels, as well as caves and disused factory buildings.”

The government stressed the tunnel would make it a bit quicker to travel from Manchester to Leeds on a train.

Bishop added: “That’s not a reason.”