Man thinks he is ‘holding court’

A MAN believes he has captivated the room with a tedious story about how great he is.

51-year-old company director Tom Booker believes that a group of friends are hanging on his every word as he tells the story of a golfing holiday that went wrong with hilarious consequences.

He said: “I am sitting in the biggest chair in the room, and everyone is looking at me with a mixture of desire and admiration.

“I could not be holding court any more even if I were wearing a crown and chomping on a broiled swan’s leg.

Booker is unaware that his audience are only humoring him, while their fixed grins and half-hearted laughter conceals feels of boredom and pity.

Former colleague Mary Fisher said: “I’ve heard the ‘runaway golf cart story’ four times and I don’t even know him that well. It’s not a very good story anyway, as well as being obviously bullshit.

“The way he tells it, it includes lots of veiled boasts about good he is at various aspects of golf. Still, at least it’s a chance to let your mind drift.”

Booker added: “After I’ve finished holding my audience in the palm of my hand, I wonder which of the women here I should choose to have sex with?” 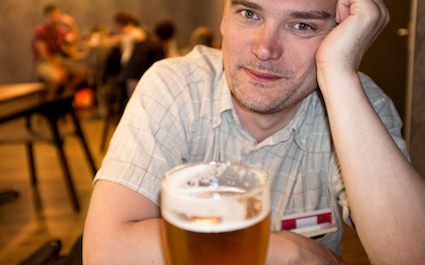 DRINKERS have demanded a cure for the weird and aggressive personality that seems to take over when they are extremely pissed.

Alcohol lovers would like a scientific breakthrough that prevents them turning into belligerent twats who argue about nonsense that is mostly in their own head.

Norman Steele said: “I drink too much a really unpleasant other me comes out. It’s like Jekyll and Hyde, if Mr Hyde was a massive knob.

“Once I had a blazing row with my friend Paul because I kept insisting all superhero films were shit. I was quite nasty to him and I actually like superhero films.

“Scientists should invent a pill that makes you rational again when you’re pissed. I bet it would stop you going on futile odysseys to score drugs too.”

Graphic designer Nikki Hollis said: “They could invent one for being pissed and maudlin while they’re at it. I think I really brought everyone down that time I decided life was meaningless and I needed to cry for an hour.”

Neuroscientist Roy Hobbs said: “Alcohol causes cognitive malfunction and impaired ‘fight or flight’ responses, which is why I took my trousers off and offered to fight everyone on Friday.”