A MAN has convinced himself a woman fancies him based on extremely flimsy evidence.

Tom Logan views any vaguely positive interaction with friend-of-a-friend Nikki Hollis as a sign she is attracted to him, even if it is something incredibly minor like offering him a crisp.

Friend Nathan Muir said: “Recently Tom had a completely tedious chat with Nikki in the pub about when they stopped serving food. Afterwards he told me they’d ‘really clicked’.

“Then he wouldn’t shut up about it when Nikki sent him a link to a car insurance website she’d found useful. I think he might have thought it was romantic.

“I suppose I’ll just have to be here to pick up the pieces when he realises someone can text you directions to the pub without actually wanting to marry you.”

Office worker Logan said: “At the weekend Nikki and I were chatting for ages about films. She said Black Panther was worth seeing and I said I would. We must have exchanged two or three emails. The chemistry was insane.

“Last week we bumped into each other in the supermarket and talked about prawns for well over a minute.”

Logan now plans to ask Hollis out, after she pretty much confirmed her feelings by offering him an old office chair she was throwing out.

Eton must be shit, everyone concludes 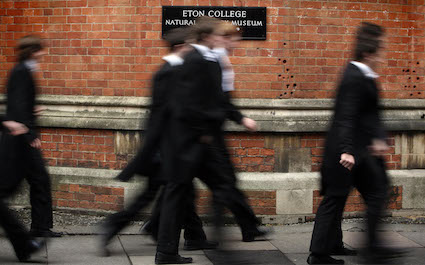 THE UK has concluded that, based on Boris Johnson and other Old Etonians, the supposedly elite school is actually turning out thick twats.

The prime minister’s constant, chilling idiocy has proved that, far from being a standard-setting educational establishment, Eton just sticks them in front of videos until it’s time to go to Oxford.

Joanna Kramer of Nuneaton said: “David Cameron. Boris Johnson. If that’s the cream of the crop, I’d hate to see the dregs.

“Danny Hibbert in my form was so stupid he ate glue, but he wouldn’t have let a man into his house to use the toilet at 5am like Oliver Letwin did. And we let him run the Cabinet.

“For years we’ve believed Eton produced the best and brightest, but it’s become clear it actually produces people convinced they’re bright while unable to work out why running head-first into brick walls hurts.

“It’s okay for the Royals, they’re meant to be thick, and I suppose we need posh actors to be villains in films, but anyone else with Eton on their CV should be barred from employment.”