AN ‘old fashioned’ man with strict beliefs about how the sexes should behave also enjoys wearing pink shirts.

Julian Cook, 55, thinks women should be wives and mothers, boys should play rugby and girls should dress like princesses, but also enjoys wearing pink.

Cook said: “All this gender neutral business that’s going on at the moment is ridiculous. In my day, boys were boys, girls were girls and the only person who was somewhere in between was Dame Edna Everage.

“I can wear pink because I’m a real man who also likes steam engines. However, if I liked knitting it would make me effeminate and gay, even if I were heterosexual, because those are the rules.

“Also, it’s fine to cry at songs about war or the monarchy, but not about feelings. I know this because a vicar told me. He was actually wearing a frock at the time but he’s allowed to because God said he could.

“So it seems pretty clear to me that these traditions are biologically immutable and haven’t just been made as we go along.”

Trump and Kim bond over shared loathing of their subjects 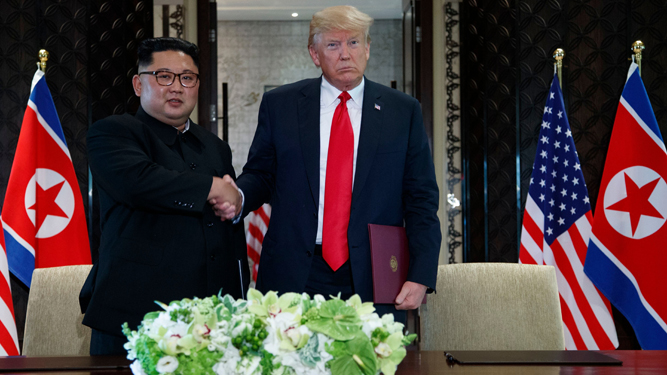 THE Trump-Kim meeting mainly focused on what utter dicks the people they govern are.

Following opening pleasantries about the hotel’s generous buffet breakfast, Donald Trump expressed frustration that he could just not kill everyone who pissed him off like Kim does.

Trump said: “They are so many stupid bastards in my country. I want to stop them ever voting again.”

Kim agreed that not having elections “makes life much easier” adding that the key to keeping them quiet is acute fear mixed with rabid nationalism to distract the masses from massive wealth inequality.

Trump replied: “Yeah I pretty much do that already. I even had these baseball caps done up that said ‘America Best’ or something. I’ll send you one, there’s a box of them under my desk.

“Have you actually ever fed anyone to a bear? Sharks? I want to get some jackals.”

He added: “Come and see my car. It’s got scented arm rests.”