Man who despises May still a bit concerned about her

A MAN who despises everything Theresa May stands for has found himself strangely worried about her wellbeing.

Tom Logan was left feeling conflicted after May’s recent TV appearances led him to believe she is on the brink of some kind of meltdown.

Teacher Logan said: “May is a horrible careerist who will fuck Britain over for the sake of her own squalid ambitions, but I also want to make her a nice cup of tea and give her a hug.

“When she was interviewed about the TV debate she had this twitchy, ‘on the edge’ look in her eyes. I thought she was either going to burst into tears or flip out like John Rambo go on some sort of rampage that ends with her climbing up a pylon.

“Also she keeps laughing madly at things that aren’t funny. The last person I saw doing that was my old neighbour who thought there were aliens living in his plug sockets.

“I’m really concerned about the evil Tory witch. I think for her mental wellbeing she needs to consider a gentler career like working for the National Trust helping school groups do brass rubbings.”

Climate in Paris seemed fine to me, says Trump 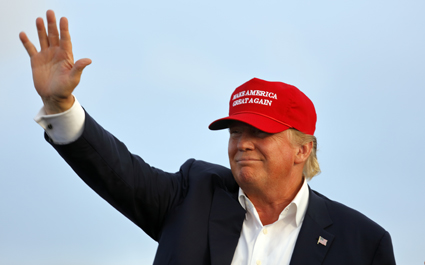 DONALD Trump is to pull out of the Paris climate accords after visiting Paris and judging the weather to be perfectly lovely.

The president visited the French capital on his European tour and has declared all reports of issues with its climate to be fake news.

He continued: “The weather in Paris is just beautiful, believe me. They have the best weather.

“You got people in Lesotho signing this thing, you got Micronesia, you got Guyana and trust me, they’ve never been there. They couldn’t afford to.

“We’re out. Paris can handle its own weather. We have some phenomenal weathermen and women on TV in the US. Get some of them.”