GETTING married provides an excellent excuse to deliberately lose touch with your more tiresome friends, according to new data.

Researchers found that 88% of newlyweds regularly turn down social invitations under the pretence their partner would go mental.

Julian Cook, from Reading University, said: “Most of us enter matrimony with at least three friends with whom, if we’re honest, we no longer have anything in common.

“This could be the archetypal ‘funny guy’ whose lager advert-based wacky antics became wearing in the middle of freshers’ week, or perhaps someone like my former faculty colleague Tom, whose many frustrations have made him into a bitter, lonely racist who eats cereal for his tea.”

Married men often dodge social opportunities with an exaggerated, eye-rolling reference to ‘her upstairs’ or being ‘under the cosh’.

New husband, Martin Bishop, said: “Despite actually quite liking my wife, when needs be I turn her into a 70s sitcom-style rolling pin-wielding harridan in some sort of Nora Battey-esque dinner lady getup.

“This is particularly the case when I bump into someone who was a vague acquaintance at school, but who now appears to think we were blood brothers who must renew our bond over a lengthy, expensive and awkward midweek drinking session.”

Wife and mother-of-two, Emma Bradford, added: “I avoided a hen weekend in Norway by saying my husband gets ferociously jealous and doesn’t trust me going out.

“Actually he’s not even slightly ferocious and has had no interest in me since the new Medal of Honour came out. But I couldn’t be bothered to listen to Sarah McKenzie going on abut her boob job while someone called ‘Stallion’ waves his flaccid, Ronseal-coated penis in my miserable face.” 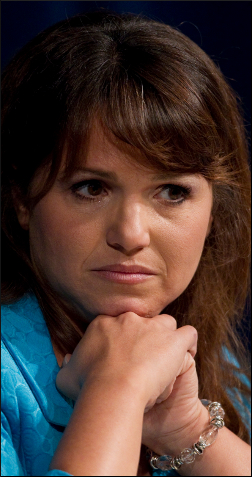 The movement’s leading maniac was filmed talking about the evils of self-pleasurement in a 1996 TV interview.

Now traditional Americans who work damn hard to keep a roof over their family’s heads while disliking homos and science have been compelled to engage in bouts of guilt-heavy onanism while watching the interview on Youtube.

Wholesome patriarch and multiple machine gun owner, Bill McKay, said: “I can’t help but think I’d like to do her in a suitably patriotic setting. Perhaps in a Chevy. At a levy.”

He added: “Since discovering it I’ve been doing the moral equivalent of adultery seven or eight times today. My left eyelid has started drooping.”

Insanely enormous pick-up owner, Joseph Turner, said: “I have these fantasies involving Sarah Palin, Christine O’Donnell, a tub of margarine and the pelvic bone of a brontosaurus.

“It’s the idea that I might subconsciously believe in dinosaurs which troubles me most.”

Political analyst, Roy Hobbs, said: “While I’m certain the rise of the Teapot movement will mean the destruction of humanity in a screaming lake of blood, bones and fire, I can’t stop wanking over terrifyingly right-wing brunettes.

“I just have this instinctive feeling that they would be eye-poppingly filthy.

“They totally would, wouldn’t they? Oh yes.”