A RECORD number of UK families can’t afford to buy all the shit they want, it emerged last night.

According to new figures 84% of households lack the financial resources to buy even the most basic unnecessary items.

Tom Logan, a company director whose business has been vaguely hit by recession, recently had to cancel plans to purchase a burgundy ‘Milan’ style corner sofa with adjustable headrests.

He said: “I just feel completely gutted. It would’ve really tied the room together.

“The kids keep asking when the new sofa’s coming and I just say ‘soon, really soon’ and ruffle their hair as they gaze up at me, their big, brown eyes full of hope.

“I just haven’t got the heart to tell them, but I think that somewhere inside they know.”

He added: “The old sofa looks really tired, it’s a sort of oceanic blue colour which was frankly a mistake and if you take the cushions off you can see a mark where my youngest dropped a Jaffa cake and didn’t tell anyone for ages so it sort of festered. We’ve had it since last June.”

Sources at DFS said the new ‘Milan’ sofa would have come in versatile sectional pieces with a matching pouffe.

Logan’s wife Anne said: “Times being what they are, once we’ve paid for food, bills, mortgage, repayments on the cars, satellite TV subscriptions, various sports clubs, the odd DVD box set and taken the kids to TGI’s, there’s nothing left.

“Even if we do manage to borrow some sofa money from somewhere, it’ll be too late for the World Cup.”

Meanwhile, mother-of-two Nikki Hollis saw a top in Whistles that would go perfectly with the blue skirt that she likes, but at Â£80 she feels that even if she does buy it she will start feeling guilty and take it back a week later.

She said: “I’d like to ask the government why I haven’t got more money.

“George Osborne could lend it to me, either at a reasonable rate of interest or just as a favour, to be nice.”

Jail Is Like 'Mean Girls' But With Massive, Angry Lesbians, Judge Tells Lohan 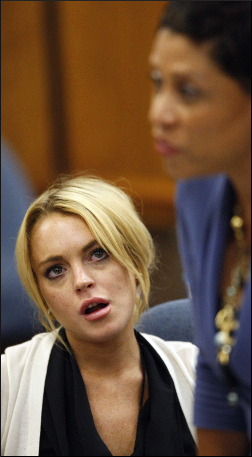 LINDSAY Lohan has been assured that jail will be reminiscent of her 2004 hit film Mean Girls but with a lot more large, aggressive bull-dykes who want to use her for sport.

The star has been sentenced to 90 days in jail for being a spoiled moron who thinks she’s better than you and for taking the millions of dollars she was paid for her inexplicable films and shoving them straight up her adorable, button nose.

Sentencing Lohan, Judge Marsha Revel said: “I’m sure you must be worried about spending three months in jail, but just think of it as a reality version of Mean Girls. There will be various rival cliques you have to negotiate with and play off against each other in your bid to become ‘Queen Bee’.

“But instead of being blonde, perky 16 year-olds, you will be dealing with some, shall we say, rather ‘hefty’ women in their mid to late 30s with crew cuts and no teeth who are a doing a 20-year stretch for strangling their deadbeat husband with a snake.

“Of course, in Mean Girls your character revealed the contents of the so-called ‘Burn Book’ thereby exposing everyone’s embarrassing secrets and scandals. I would advise that you refrain from doing that while in jail unless there are lots of film parts for a 24 year-old woman who has the phrase ‘Sadie’s Bitch’ tattooed across her forehead.”

Judge Revel added: “And if it all becomes too much then just imagine you are in the sequel to Freaky Friday, except this time you’ve swapped bodies with a no-talent celebrity drug addict who made the mistake of thinking I’m a fucking idiot.”

Experts say that as a budding lesbian with pert breasts Lohan will be seen as a trophy by the correctional facility’s most senior bulls.

Helen Archer, author of How to Have Better Prison Sex, said: “This will certainly widen Lindsay’s lesbian repertoire which until now has been limited mainly to 14 year-old DJs who are probably boys anyway.

“I suspect many of her new friends will look like five or six Samantha Ronsons held together with electrical tape.”