Ministers said the decision to allow people to lash out at any time had been vindicated as millions of citizens embraced the new culture of kicking each other's teeth in.

The introduction of 24-hour violence laws has seen violence increase from frequent to constant, while many town centres have been transformed into trendy, cosmopolitan no-go areas.

The government insisted the only downside was a shortage of council staff willing to scrub blood off the pavements.

Home secretary Jacqui Smith said: "Responsible adults are able to enjoy round-the-clock violence, with many of them using knives and chains for the first time.

"Gone are the days when everyone tried to cram in as much violence as they could between 11pm and midnight.

"Now you can walk down an English high street at three or four in the morning and see dozens of responsible adults beating the hell out of each other."

She added: "This is what continental Europe would be like if it was horribly violent all the time." 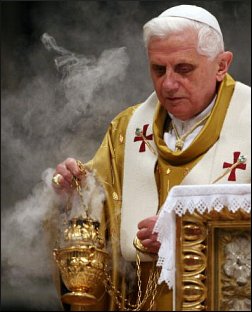 IAN Paisley is to resign as Northern Ireland's first minister so he can devote more time to shouting abuse at the Pope.

Dr Paisley, one of Europe's most accomplished Pope hecklers, said that while devolution faced many challenges, the time was right for him to, 'have a crack at this uppity German Pontiff'.

He added: "While I have been glaring at terrorists across the Cabinet table, this silver-tongued witch-doctor has been spreading his voodoo message unmolested.

"For months I have been torn between my duties as first minister and my raging desire to march into St Peter's Square with my best megaphone and shout 'Harlot of Babylon!'."

The first minister revealed he had been working on a new range of Pope heckles, including: 'Nice hat!', 'Incense is for poofters!' and 'Oi Fritz! Why are you dressed like a girl?'.

Martin McGuinness, Sinn Fein's deputy first minister, said: "It's been obvious for some time that he was itching to get back into the Pope heckling game.

"At the last Cabinet meeting he emptied his bowels in the middle of the table before sticking a little Union Jack in it and saying 'that's what I think of your Pope'."

Prime minister Gordon Brown said: "It is a testament to Northern Ireland's new spirit of tolerance that the highest office in the land could have been occupied by someone who was so clearly and demonstrably insane."