Mother has new appreciation of what's important and it's childcare

A MOTHER of two children under five has realised that nothing is more vital to a happy life than someone else looking after the kids.

Payroll manager Carolyn Ryan is working from home while looking after a two-year-old and four-year-old, and now understands that what really matters is nurseries and grandparents.

She said: “I used to worry that I was in some way damaging them by sending them to childcare. But being home with me is the trauma from which they may never recover.

“This time together’s giving me time to decide what childhood I want for my little poppets, and it’s one where I’m not losing my shit at them for demanding I play Jumpy Hop Horse with them again.

“Nothing can match the care and attention a professional can give my children, compared to my half-arsed attempts at shoving crisps in them while they play Fortnite.

“And it’s important to me as well; to not just be a mother, or a worker, but an actual f**king human being with a life that’s more than between 9pm when they go to bed and 10pm when I do.”

Ryan’s mother Celia said: “Raising young children is the toughest and most important job on earth, which is why I’ve always advised Carolyn to stick to payroll.” 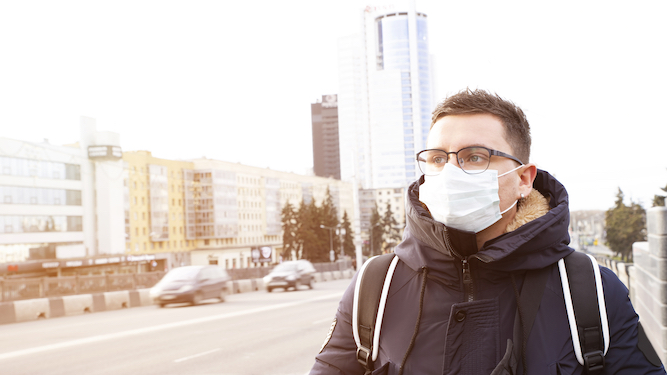 EVERYTHING has changed, and every stranger or shiny surface is potentially a vector of infection. Here are the new habits you’ve picked up:

Holding your breath while walking past someone

Someone approaching? Could they be exhaling crimson clouds of deadly virus right into your face? As long as you don’t breathe for those couple of seconds until you pass them then you should be fine. Even doctors would surely recommend that.

Crossing the road to avoid people

The average Briton is performing more road-crossings on a stroll down the street than Frogger. You cross this way to avoid a jogger, that way to avoid a pensioner with shopping,  go up a side street to dodge a whole family, and suddenly you can’t remember where you were going or where you live.

Resenting anyone who talks in the supermarket

The supermarket is a silent, stressful place of three-point trolley manouvres and terrified eyes looking over facemasks. Anyone who talks, even if it is just on their own mobile while waiting in the spaced-out queue, isn’t taking this seriously enough.

Players are well over two metres apart in tennis but society and its rules won’t let you play anymore. Found your own underground tennis club where you can safely exercise in an emphatically British way, living like a white-clad outlaw.

It’s unlikely, but scientists don’t know everything, and a further mutation of the virus could cause it to take on the form of a human being and come to your house. It might even disguise itself as a close friend, relative or the postman. Trust nobody and keep one hand on your bat.