Mum drops off kids 72 hours early for reopening of school

A DILIGENT mother-of-two has left her children at the school gates a full three days before their new term starts on Monday.

Susan Traherne dropped off her children Mia and George with three days’ worth of sandwiches and water to make sure there was no danger of them failing to catch up with their studies.

Her main concern was their long-term educational prospects, but also the fact that they were screaming and attempting to put small change up either other’s noses.

“But as a responsible parent I felt now – as in ‘now, right now, this very second before I go insane’ – was the time for them to get back into mainstream schooling.

“I hosed them down in the garden, forced them into their uniforms under threat of violence and then jumped every red light on the school run. There’s nothing stronger than a mother’s love.”

Mia and George will spend the next three evenings sheltering in the school bike shed and rationing their packed lunches. Traherne is meanwhile celebrating her parenting triumph with her third large G&T. 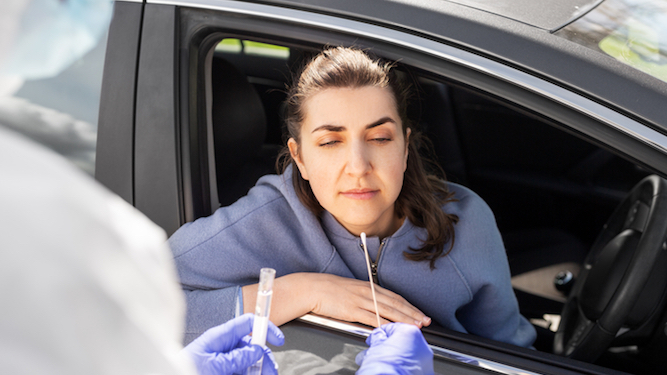 Researchers at the Institute for Studies believe that unless the country thinks fast it will exhaust all of its options for failure within a fortnight.

Professor Henry Brubaker said: “The last week alone saw the UK’s ineptitude rating rise from ‘British cuisine’ all the way up to ‘penalty shootout’. At this rate we’ll need to invent things to go wrong.

“I thought we could delay screwing up the track and trace app until mid-June, but this week Matt Hancock cocked it up just as the government spunked all its political capital to save Dominic Cummings.

“All we’ve got left to make a pig’s ear of is the easing of lockdown and preventing a second wave. But it appears the government is working hard to make sure that nightmare scenario definitely happens.

“Oh and we’re still going ahead with Brexit. Still, at least Nando’s is open again.”