Nation fully aware that exercise is good for you

BRITONS know that physical activity is good for them but they absolutely cannot be arsed, they have confirmed.

After middle-aged people were urged to walk faster, the general public has firmly declined the offer of an extended life.

Norwich-based Wayne Hayes said: “If it’s between an early death or 10 minutes of brisk walking every day, I’d opt for the early death.

“It’s nice of scientists to warn us, but to be honest I never really thought that drinking loads, eating chicken out of cardboard buckets and sitting on my arse for 12 hours a day was going to help me live past 100.”

However Susan Traherne said: “I eat predominantly forms of kale and I run at least 30 miles every week.

“The doctors have told me I’m extending my life by years. God I hope I’m not.” 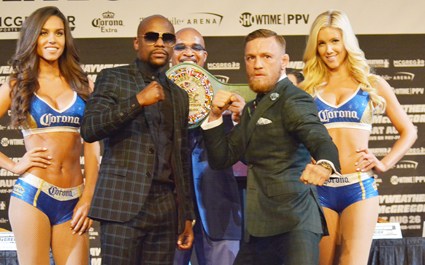 A MAN who reads book is currently thinking about almost nothing but tomorrow’s ludicrous boxing mismatch.

Reasonably intelligent Nathan Muir, 37, recognises that the fight between Mayweather and McGregor is a means of separating fools from their pay-per-view money but is desperate to watch it.

Muir said, “The last thing I would do is spend £20 to watch a foregone conclusion. I’ll probably watch an Iranian movie instead. Or catch up on anti-Trump podcasts.

“At least, that’s what I’d like to think. The truth is, I’m sucked in by the hype like a spider down a plughole.

“Maybe the apparently useless boxer McGregor might fell Mayweather, the wiliest pugilist of all time with a lucky haymaker. Maybe pigs might fly. Maybe I really ought to watch to find out.

“I’ll tell you what I’ll do. I’ll sign up for the pay-per-view so that I can see things from the perspective of the gullible idiot whose head is so sad and empty that they would actually pay to be duped like this.

“Actually, that’ll be pretty easy because I am that gullible idiot.”