BRITAINS feeling of upbeat confidence will have been completely obliterated by lunchtime, it has been claimed.

Following a weekend of sporting triumphs, by Sunday evening the UK had reached levels of optimism unseen since 1587 when Sir Francis Drake returned from Cadiz with the king of Spain in a headlock.

But a combination of commuting and re-acquaintance with work colleagues means that by the time the country consumes its sad vacuum-packed sandwiches at its collective desks, the Olympics will once more be that thing in London that cost too much.

Anyone arriving at work still elated will be demoralised by the inevitable colleague relating everything that happened to them since 5pm on Friday in the minute detail normally reserved for a crime reconstruction.

“Those who dont work are unlikely to fare much better. The school holidays mean anybody staying at home will be no more than eight feet away from a chronically bored child and must cope with the weather equivalent of Russian roulette where three of the gun’s chambers are loaded with horizontal rain.

“Morale is likely to remain low unless the Olympics closing ceremony features Boris Johnson zip-wiring into the hollow torso of a wicker man surrounded by children with flaming torches.”

Wayne Hayes, a desk-residing organism from Carlisle, said: I remember when Mo Farah was hugging his family on the track thinking to myself It really doesnt get better than this but I had hoped not to be proven so catastrophically right so quickly.

Olympians blasted for smoking outside stadium 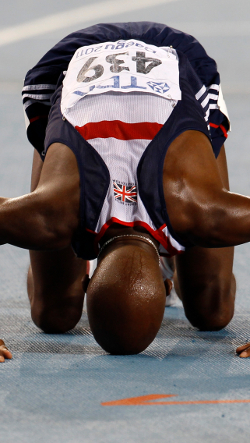 OLYMPIC athletes including Mo Farah and Jessica Ennis have been reprimanded for smoking near the main entrance to Olympic Park.

Cigarette smoking is strictly forbidden inside the complex, so a group of competitors had taken to gathering by the bins outside the main gate.

Multiple gold medallist Mo Farah said: “When you’ve got the hopes and dreams of a nation on your shoulders, that’s when you really need a fag.

“Personally it’s the only thing that sorts me out before a race.”

Farah said: “Lord Coe reckons it gives the wrong impression if we’re smoking out the front because kids in the queue can see us, but so what? The fans like to see our human side.

“When I was twelve I saw Daley Thompson having a cig outside a stadium and because of how cool he looked I decided to take up athletics.”

Heptathlon winner Jessica Ennis, who has since quit the Olympics so she can smoke unmolested, said: “Last week I only had roll-ups and I really wanted a straight. This amazing hurdler from Finland offered me one and we got chatting, now we’re friends.

“Smoking brings people together, which should be what the Olympics is all about.”

Doctor Stephen Malley said: “There is some evidence that cigarettes are detrimental to the health but it has never been proved.

“They’re definitely nice though, once you get past the initial coughing stage, so smoking is probably a good thing to do.