Near death experience gets contemporary makeover

GOD has updated the ‘near death experience’ for the first time since the 70s.

The deity has retired the tunnel-style visuals, dry ice and unflattering ‘curtain’ robes that the deceased’s ancestors were forced to wear.

God said: “A few people had complained about the robes saying they were a bit ’70s TV movie’. Personally I like robes, I think they’re a design classic, but sometimes you must submit to popular taste.

“In the new near death experience, instead of coming up a tunnel you just flash straight into a minimalist warehouse space with a sexy girl DJ and buff angels offering fresh organic grapes.

“Then your dead relatives appear in 80s Diadora tracksuits, like something in a Daft Punk video.

“They’re going to act normal and not be all like ‘we love you’, which is frankly off-putting. I’ve told everyone to keep the chat light.”

Account manager Julian Cook took on the project after his own disappointing near death experience: At first I saw pure white light which was absolutely spot on from a design perspective.

Then the most ghastly vision of an English country cottage appeared, like a bloody Hallmark card without even the ironic urban sampling ethos that makes Cath Kidston such a powerful high-street brand.

Unfortunately the world beyond is currently dominated by pre-war old folk who like a nice watercolour of a stone bridge, commemorative plates of Royal occasions and doilies under everything.

“But this re-imagining is pretty awesome. You’re really going to want to die.”

We let in too many twats, says Bryant 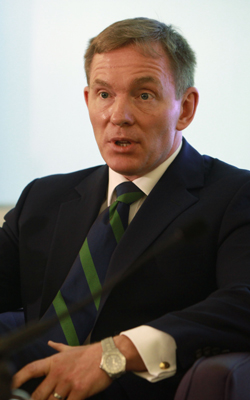 SHADOW immigration minister Chris Bryant has admitted that too many twats have been allowed into the Labour Party.

Bryant warned that the party was struggling to cope with a large influx of unskilled politicians who had set up their own Westminster ghetto and were taking jobs from people who might actually get rid of the Tories.

He said: Its time for the Labour Party to admit underestimating the effect of letting in hundreds of twats.

Its starting to feel like it isnt the Labour Party anymore. Ed Miliband looks like some student union vice president who got into politics to lose his virginity and Harriet Harman is so posh she makes Joanna Lumley look like a Big Brother contestant.

Its time to put restrictions on entering the Labour party. From now on people will only be allowed in if they have some experience, however minor, of life outside politics and a genuine desire to be at least marginally different from the Tories.

Labour will attempt to discourage smarmy political wannabes from joining by hiring a fleet of billboard vans with the message: ‘Dont join the Labour Party, were already full. Of twats.’

Bryant added: This used to be a nice party, but now weve been swamped with sharp-suited tossers who only care about being on telly and placating bigoted swing voters who read the Daily Mail unironically.

“Hey wait, this speech is different to the draft version I read last week. Are people fucking with me again?