A WRITER has invented ‘the chillaxed mega-mum’.

The concept is a cynical marketing ploy to enable talentless former journalist Donna Sheridan to start a TV career.

Sheridan said: “The chillaxed mega-mum is the sort of modern mum who’s juggling work and family but is totally laid-back about it thanks to the tips outlined in my book, CMM: How to Be a Chillaxed Mega-mum.

“She’s climbing the corporate ladder and has a fantastic sex life, but still organises sumptuous Treasure Island-themed kids’ birthday parties while also training for a pilot’s licence and somehow exuding a super-chilled vibe.

“I expect there is a touch of boho to her too, but less so than ‘boho street performer spiritual-but-fun mum’ which is very last year.”

Sheridan, who was on the dole last week, added: “She’s a 21st century phenoma-woman, which is the sort of thing I’ll be saying if I get invited on This Morning, where, if I play my cards right, I will be appearing regularly.”

Actual mum Nikki Hollis said: “I’m a tired slightly overweight mum, I can do a book if you want.

“My top tip is to always eat one biscuit too many.” 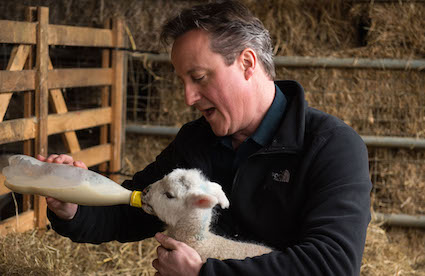 DAVID Cameron has apologised after being caught on tape describing a lamb he had just fed as ‘bigoted’.

The prime minister was filmed with the infant sheep on Sunday as part of an Easter election drive.

However, his broadcast microphone was accidentally left on as he exited the stable and got into his car.

Cameron can be heard telling his aide: “That was a disaster. They should never have put me with that lamb. Whose idea was that?”

When asked what had gone wrong, Cameron replies: “Everything. It was just some bigoted lamb.

“It told me it used to be Tory, but it might vote UKIP as it’s heard a rumour that New Zealand lambs are coming to Britain to eat all the grass.”

He added: “It’ll look cute in the photos, but it’s actually a stupid fucking prick.”

After the recording was played back to him during a live radio interview, the Tory leader said: “I’m sorry if I’ve said anything that has been hurtful. It was shameful and wrong to pass judgement on a lamb I had only just met.”

The lamb added: “I got a lovely message from him saying he’s looking forward to seeing me again this time next year.”