New parent and massive stoner discover they have loads in common

A NEW mum and a pothead have bonded over having red eyes and feeling divorced from reality, it has emerged.

Nikki Hollis, 30, and Nathan Muir, 19, met when they were both sitting on a park bench in the middle of the afternoon. Muir initially thought Hollis must be stoned off her box too when she started giggling uncontrollably for no obvious reason.

Hollis said: “I must have looked like I’d consumed some kind of illicit substance, but actually I just haven’t slept for more than 20 minutes at once for 97 consecutive nights, which seems to have a similar effect.

“I explained that I spent most of my time either giggling hysterically and hallucinating a bit or sitting on the sofa staring into space like a depressed zombie and he said he knew exactly how I felt.

“He was even more understanding when I said I hadn’t washed my hair for three days and lived on a diet of crisps and Nutella straight out of the jar.”

Millennials need to grow up and get over Harry Potter, says 46-year-old with Stormtrooper helmet 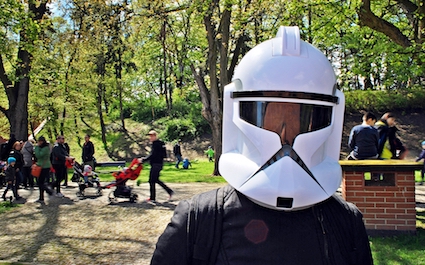 After hearing junior employees discuss what house of Hogwarts they would be in, Bill McKay derisively told them to ‘grow up’ and ‘stop reading books for kiddies’.

He continued: “I’m not angry at them. I’m angry for them.

“I’m sure it was all very magical when they were little, but come on, you can’t waste your whole life on childish nonsense,” said the Coventry man, who has spent more than £15,000 tracking down every Star Wars figure he owned when he was eight.

“There’s a whole galaxy of other books, films and role-playing games out there, as I’ve tried to tell them. I even offered to lend out some of my Expanded Universe novels, which are very dark.

“But still they insist on clinging to this magical Bantha crap. And they wonder why they can’t afford houses?”