A PASSENGER has been refused boarding to her flight to Malta because she has not bought enough perfume, sunglasses or Toblerones.

32-year-old Carolyn Ryan was told she did not qualify for boarding after security personnel flagged up her failure to purchase even a magazine from WH Smith before going to the gate for her flight.

She said: “Apparently because I hadn’t met ‘minimum spend limits’ on a previous flight I’d been placed on a no-fly list, and it was all in the terms and conditions.

“And while I was kicking up a fuss the other passengers were all walking past, pointing to their board shorts or litres of gin or fancy moisturisers, tutting like I was the fool.

“I frantically dashed back through the airport and bought a party bag of Daim bars and a bottle of Guilty by Gucci, but by the time I got back I’d missed it.

“My dad said I was an idiot, and in the 70s you weren’t even allowed at your gate until you’d bought at least 400 Silk Cut. It’s ridiculous.”

The news follows the emergency landing of a Thomas Cook flight to Portugal last week after a passenger put the whole plane at risk by refusing to buy £20 of charity scratchcards. 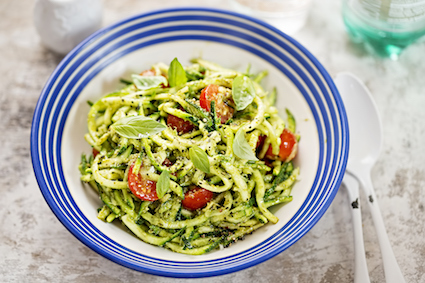 THE government has been urged to secure post-Brexit supplies of courgetti by people who think it is in any way a substitute for pasta.

As the Brexit negotiations have so far failed to address the courgetti situation, millions of Britons on low carb diets are incredibly worried they will not be able to eat massive bowlfuls of it every day.

Mary Fisher, from Stevenage, said: “My main understanding of Brexit has been that it’s going to make it harder for my eldest son to piss around in Berlin for several years pursuing a doomed career as a DJ before returning home to become an IT consultant.

“But recently I have heard talk of a food shortage that will hit the courgetti sector particularly hard. Have you ever tried to spiralise a turnip? It’s sore and it tastes shit.

“My husband has said that I’ll just have to eat normal pasta like everyone else, but it will be like returning to the culinary dark ages when people thought sushi was the height of sophistication rather than a bog standard staple. Brexit has hit me hard on a personal level.

“I’m starting to think I should have learnt a bit about it before I voted out.”