WARNINGS about anything are just scaremongering by cowardly Remainers, a Brexiter believes.

Sales manager Roy Hobbs thinks all risks – whether post-Brexit food shortages or using a chainsaw without training – are rubbish made up by pro-EU weaklings.

Hobbs said: “Take drinking bleach. People say it’s bad, but there’s literally no way of knowing until you’ve tried it. I’ll probably have some tonight with lemonade. That’ll show them.

“Your typical Remoaner lives in a permanent state of fear. I bet they’re even scared of having a quick nap when you’re driving on the motorway.

“I couldn’t live like that. If I want to build a fire pit in my loft for when it’s raining I’ll bloody well do it, even if some jobsworth fireman tells me the whole house might go up next time.

“You can’t fool us Brexiters. I’m not worried about food shortages because I live near a massive Asda.”

Other risks that Hobbs plans to ignore include placing a £5,000 bet on the Grand National, teaching his children to knife-fight and constructing his own trampoline.

He added: “If these feeble Remoaners try to stop Brexit I’ll be out on the streets rioting, once they’ve taken the plaster casts off my legs.”

'Plenty more fish in the sea' no longer applicable to marine life or dating, experts confirm 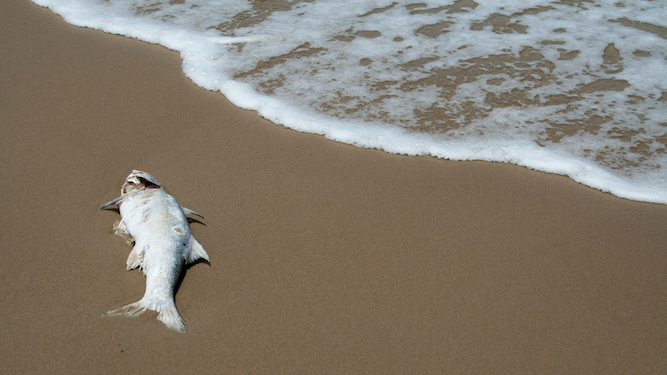 THE phrase ‘there’s plenty more fish in the sea’ is now untrue whether used to refer to the availabiity of romantic partners or the actual sea, it has emerged.

Relationship experts and oceanographers have agreed that both the oceans and the dating pool are now polluted with unthinkable levels of toxic trash.

Professor Mary Fisher said: “Whether you’re a loggerhead turtle or a 26-year-old SWF searching for good times maybe something more, you’re going to choke on something discarded and nasty.

“Strange, damaged creatures roam around looking for victims while the most desirable species are ruthlessly hunted to extinction by superpredators, in sea and dating both.

“Soon there will be no more fish in the sea, either actual or metaphorical, that are in any way palatable and humanity’s numbers will plunge accordingly. And not before time.”

Fisher added that increasingly single people were considering doing a ‘Shape of Water’ and hooking up with actual fish, which are nicer than most humans.