ONE in 10 young unemployed British adults is so dissatisfied with life that they are just begging to be kicked in the teeth, new research suggests.

A survey by the Prince's Trust found 30% of young people are less happy than they were as a child, mainly because they are now expected to pay for some of their own stuff.

Almost half said they were regularly stressed, usually at the thought of someone asking them to do something.

Meanwhile 62 percent are just little shits who would benefit enormously from being dropped into the middle of an African civil war.

Sociologist, Professor Tom Logan, said: "Being young and unemployed must be awful. Then again I offered my nephew twenty quid to wash my car and he cut my achilles tendon with a fruit knife."

Charles Undungwe, 16, from Zimbabwe, said: "Life here can be dissatisfying too, what with all the cholera and starvation, but you just pull your socks up and get on with it. Except we've eaten all the socks."

He added: "Despite my poverty I hope that one day I will be able to go to college, learn valuable skills, get a job and make money so that I can buy a plane ticket, fly to England and punch every single one of you squarely in the face." 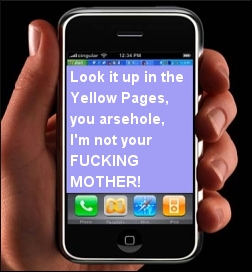 IPHONES and iPods will start to behave erratically once a month as Apple boss Steve Jobs slowly turns into a girl, it was confirmed last night.

Jobs revealed his recent weight loss has been caused by an hormonal imbalance, although he reckons it has just moved from his hips to his thighs.

Now consumers have been warned that Apple's hi-tech gadgets may soon start to behave so irrationally you may be tempted to shove them out of a moving car.

An Apple spokesman said: "When Steve turns into a girl, all his products turn into a girl."

He added: "Roughly every four weeks, for reasons known only to itself, your iPhone may suddenly decide that you're a total and utter prick.

"All normal functions will cease and every time you touch it a deafeningly loud alarm will go off. It may also try to kill you.

"Meanwhile your iPod will want to play angry songs by Alanis Morrisette over and over again for about four days.

"Unfortunately there's nothing we can do about it as Apple products do not, as yet, respond to huge amounts of chocolate and Grey's Anatomy."

Meanwhile Apple's ultra-slim MacBook Air laptop may also be withdrawn after Jobs decreed that it looked like 'a big fat cow'.