38-year-old Norman Steele has been targeted by patronising supportive remarks for being a larger nightclub dancer.

Steele was busting moves to the Ghostbusters theme tune at his local Evolution club when people began shouting praise.

He said: “This group of blokes were shaking my hand, saying ‘nice one mate’ and ‘let us buy you a pint’. I was confused because I am shit at dancing.

“Then a really super attractive girl gave me a rose which was doubly puzzling. Suddenly the penny dropped – it was all because I’m fat.

“My message to all those people being extra nice to me on Friday night is fuck off. I am not your performing pony. I am a fat guy shaking his shit.

“Just because I’m big, I don’t need your stupid encouragement just to do normal stuff like going out, washing my car, or indeed eating a kebab. I blame the internet.”

Nightclub-goer Emma Bradford said: “Chubby people in clubs love my unsolicited comments like, ‘you’re a big beautiful mover’ or ‘you are an ambassador for your kind’.

“Just like wheelchair-using strangers love it when I lean over them and go ‘nice one mate’ while doing a double thumbs-up right in their brave faces. I’m an awesome person.”

European leaders not allowing Cameron to use toilet 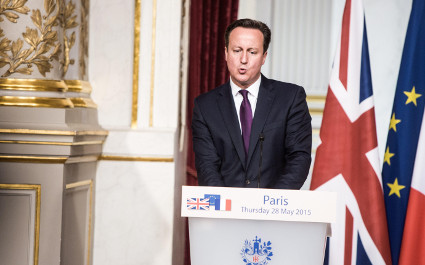 NONE of the European leaders visited on David Cameron’s whistle-stop tour of Europe are letting him use the toilet.

The prime minister, whose breakfast with Polish leader Ewa Kopacz was accompanied by pints of water and who drank three steins of ale over lunch with Angela Merkel, has dropped all demands for concessions in favour of squirming in his seat while grimacing.

EU president Jean-Claude Juncker said: “I noticed he’d hired a cheap private jet with no loo and called everyone telling them to keep him hydrated.

“After lunch, he’s visiting a hydroelectric power plant in Romania then standing very still on stage while Sweden honours war veterans next to the Njupeskär waterfall.”

Cameron, who was told he is welcome to use any toilet facilities as long as he asks in that country’s native language, was last seen desperately eyeing a pot plant.