Parents welcome third child who is clearly an accident

A COUPLE have welcomed their third child, who is clearly an accident although they are playing that down.

Tom and Susan Booker announced the birth of their new son Ralph, who is seven years younger than his siblings who were not fairly obviously the result of a contraceptive mishap.

Susan Booker said: “It’s so great to have another baby, especially after having been through the whole exhausting process twice almost a decade ago.

“Two children is fine but having a third one when you’re nearly 40 really completes the family.”

“We only have sex about once a month and somehow we are blessed with his miracle. A miracle that could have been easily avoided if certain people had taken the agreed precautions but let’s not dwell on that.

“We’d always wanted another, despite having chucked out all our baby stuff after the last one was born.

“I may look like a pale exhausted husk but I’m smiling on the inside.” 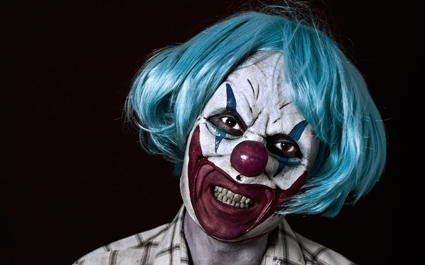 THE ‘killer clown’ craze is either the result of complicated sociological factors or just twats arsing about, it has been claimed.

As reports of menacing clowns continue, some academics claimed the trend was a sign of wider social problems triggering the subversion of clown archetypes while others described it as ‘wankers’.

Professor Henry Brubaker of the Institute for Studies said: “There have been numerous clown sightings in Gloucester. In my professional opinion that’s because there is absolutely fuck all to do there.

“I think they have a farmer’s market once a week and the odd Blues Brothers tribute night but that’s about it.  All it takes is for a few bored knobheads to discover the ‘party shop’ and you have yourself a media phenomenon.”

Student Martin Bishop said: “Yesterday I dressed up as Pennywise from It and jumped out on a lone pedestrian but he failed to appreciate the pop culture reference and battered me.

“You’d never think it but acting like a dangerous lunatic around potentially hard strangers can backfire.”