People who like big decorative letters cannot even read

PEOPLE with big letters strewn around their homes are illiterate morons, it has been confirmed.

93 per cent of UK homes contain large decorative letters made of wood or metal, either spelling out their initials, the word ‘love’ or simply strewn around like the relics of a broken language.

Interior designer Mary Fisher said: “If decorative letter owners could read, the random bits of alphabet littering their rooms would do their heads in.

“The simple fact is that they do not realise they are letters. They just consider them to be trendy, funky squiggly patterns.”

43-year-old Stephen Malley has a massive metal ‘R’ on his mantelpiece. He said: “I just assumed it was a simple picture of a lady with big tits.”

Malley confirmed he had never seen a book but that he did not like the idea of one.

“Apparently it’s lots of little pictures all in rows, printed on very thin bits of wood all stuck together. It does sound like something that would make visitors think we are cool.” 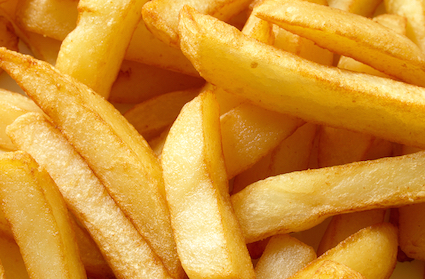 AS Britain prepares to spend £300 million on chocolate, experts have confirmed that chips are still far better.

Researchers found that while chocolate contains theobromine, a stimulant similar to the chemical released by the brain when you are in love, it was not superb, in the way that chips obviously are.

Nutritionist Dr Roy Hobbs said: “No-one stumbles out of a nightclub gagging for a bag of Revels. And no-one is desperately searching the gutter for change so they can have a third tray of Maltesers slathered in curry sauce.”

Experiments have shown that a bag of chips is eight times more powerful at enticing people from 50ft away than an open bag of Cadbury’s Buttons, even the giant ones.

The National Society of Chip Shop Owners is now campaigning for chips to replace chocolate eggs at Easter, arguing that the death and resurrection of Christ is like the burying of potatoes that are then gloriously reborn as chips.

A spokesman said: “And let’s be absolutely clear, we’re talking about chips, not ‘fries’. You must never, ever give fries to someone who asked for chips.”