Police get go-ahead for lager cannons

Think tanks believe the ban on budget alcohol could make the masses excessively clear-headed and difficult to manipulate.

Tory backbencher Julian Cook said: “The last thing we need is an underclass that is strong, healthy and in control of its bladder functions.

“It is my belief that for decades Super Strength White Ace lager, and the other one with the fist on the can, have been the only things been standing between us and revolution.

Take away their daily dose of happy piss that keeps them merry while conveniently killing them, and you’ve got an army on your hands.

They’ll be working out in the morning, agitating at public meetings in the afternoon and reading Marx in the original German in the evening. Eventually becoming ‘super strength’ in mind, body and spirit.”

Lager cannons direct a super-concentrated jet of Special Brew or Tungsten that penetrates the pores of miscreants, first knocking them to the ground then washing over them like waves of sweet oblivion.

A police spokesman said: “We tested it on an anti-cuts demo. It’s like magic, they just started fighting each other then after they’re all knackered you scoop them into ambulances.”

Britain's new dream is to not have house by the sea 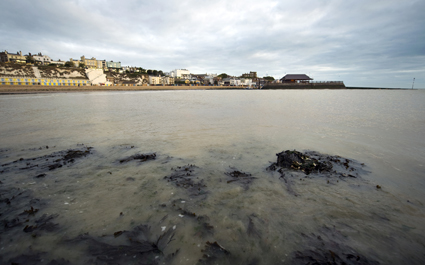 MILLIONS of Britons who dreamed of a coastal cottage would now prefer something several hundred miles inland.

Bond trader Julian Cook said: “I’ve always wanted to retire to a little place on the Dorset coast with white-painted walls and a view of the sea. I was going to call it Crabpots.

“The problem is that the sea is made of water. Deep, floody water.

“Instead, I’ve spent my savings on a two-up two-down former Victorian slum property in Derby which I call 44 Grange Street, Derby.”

Estate agent Francesca Johnson said: Apparently, buyers don’t want to sleep on the floor of a school gymnasium while their precious possessions are being swept away in a torrent of filthy water.

“People give up on their dreams so easily these days.”