A BRITISH teenager has changed his mind about joining ISIS after reading anopinion piece by Richard Littlejohn.

London-born Malik Iqbal, 19, said: “Littlejohn has a huge fan base within the working-class teenage Muslim community. Me and my mates think he’s amazing. So just before I headed out to join ISIS, I grabbed the Mail to have a quick scan of his latest.”

Iqbal added: “It was all about how terrorists are idiots and we should be happy when they die. The argument Richard put forward to support his view was so clear-headed and meticulously researched, and his ridiculing of the Muslim faith was so clever and funny.

“I suddenly thought: ‘You know what? If Richard thinks joining ISIS is a mug’s game, then count me out.'”

He added: “I’m now training to become an Anglican priest and I can’t wait for the new Top Gear episodes.”

Woman putting random shit in food to 'perk it up' 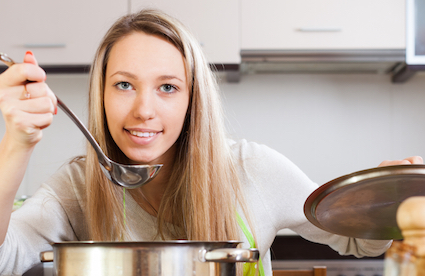 A WOMAN believes that adding random ingredients to food makes it better and more exotic.

Sheridan said: “Last night I spiced up some bangers and mash by adding a jar of chilli flakes. My husband said it made his anus hurt, but that’s probably because he’s not used to Mexican food.

“My favourite food is Chinese, because you can make anything sweet and sour with sugar, vinegar and tinned pineapple. This morning we had Chinese egg and bacon with loads of soy sauce.”

She added: “I get a lot of my ideas from MasterChef. If they do something fancy like sea bass with fennel, I’ll do my own version with tuna mayonnaise and liquorice allsorts.”

“Still, I’d rather she fucked around with herbs and spices instead of getting whole concepts mixed up, like she did with ‘rare chicken’. That was three days on the toilet.”