Pound says it would rather be French

BRITAINS currency has denounced its home country and has asked to be adopted by France.

As Scottish people professed their love for the currency, the pound revealed it would rather be spent on character-building animal parts, exotic, unfiltered adultery and beautiful old farmhouses with slightly racist shutters.

The pound said: I want nothing more to do with Britain and its unending ghastliness.

I hate being spent on ‘semis’ and Qashqais and sausages that are trying far too hard.

Meanwhile, Im being pumped sideways into fruit machines and bingo websites by some pudgy-fingered catastrophe.

The pound stressed that France hated the Euro anyway and its previous currency, the Franc, was ‘pathetic, stupid and worth 10 times less than me’.

It added: Scottish people spend me on the most disgusting things imaginable. Greyish-brown lumps of semi-hardened goo which they gnaw at like fat, angry dingos.

And then theres all the unused tennis rackets and the pubic styling wax and the insane quantities of Savlon.

What are they doing to each other? 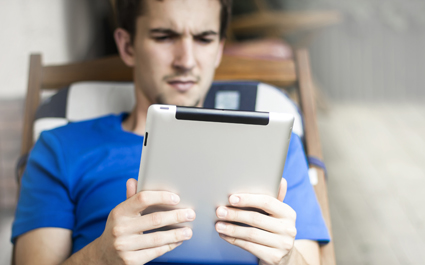 FACEBOOK addict Wayne Hayes has become so reliant on the site that he communicates entirely in leading statements.

The unemployed cab driver posted his first status – ‘I don’t suppose anyone’s reading this?’ – five years ago and his speech patterns have become increasingly vague and needy ever since.

Hayes said: “If you know somebody whose life has been ruined by Facebook, don’t wait until it’s too late to tell them. So, so disappointed.

“I know that most of you won’t even read to the end of this but if you do, can I just say it’s a really inconvenient way of saying things?”

Unable to directly ask for anything Hayes orders drinks by simply pointing at other people’s pints and saying, “That looks like fun.”

Hayes’s girlfriend Mary Fisher said: “When I get home from work he greets me with ‘When you haven’t seen somebody and you’ve missed them, it would be nice if they told you how their day went?’

“I have to remind myself that he’s ill otherwise I would wound him.”

Therapist Nikki Hollis said: “I’ve been working with Mr Hayes by posting a series of dolphin and Native American pictures on his timeline next to motivational messages like ‘You’re right, nobody gives a shit. But why should they? – Gandhi’ next to them.

“I feel like we’re making progress but sometimes I just feel like poking the bejesus out of him.”