Pretending to be hard now a job

THE government is to reduce youth unemployment by making pretending to be hard an actual job.

Under new proposals, anyone under the age of 25 who has a tattoo of a bull terrier’s face, refers to the police as ‘feds’ and suffers from the delusion that they are part of the criminal underworld will receive a modest weekly wage.

A DWP spokesman said: “We need to reduce youth unemployment to stop Newsnight banging on about it, and many young people want to be 50 Cent.

“Idiots will be classified as being in full-time employment as a hard person, even if the extent of their hardness is shoplifting bags of Nik Naks or vandalising the swings at the local playground.

“They will be required to carry out certain activities, such as sitting on walls and pulling their hoods up whenever a police car goes past.”

Newly accredited hard person Wayne Hayes said: “This is a dream come true. Some hater had questioned my gangsta credentials because I’m retaking my GCSEs at the local tech college rather than selling crack.

“I’m planning to celebrate by smoking some blunts back at my crib then opening all the doors and windows so my mum doesn’t smell it when she gets home.”

The DWP now plans to extend the scheme to bullshitters who think they are local vigilantes and lone drinkers who claim to have roadied for Oasis.

Jesus Christ get it off my face, says scientist 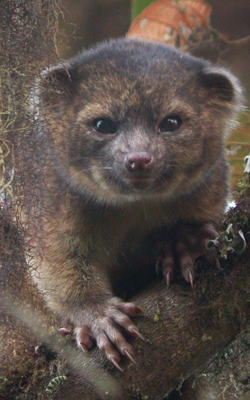 THE scientist who discovered a new ferret-like mammal is pleading with colleagues to somehow get it off his face.

Naturalist Tom Logan encountered the fascinating creature when it leapt from a tree, sunk its sharp claws into his cheeks and began frenziedly biting at his features.

He said: “Somebody do something, it hurts so much. Oh God I think it’s got my eye.”

Looking on, Logan’s colleague Professor Henry Brubaker said: “This is a big moment for science. Look at the unique parallel markings on its back.

“No wait that’s Tom’s blood. It must have hit an artery.”

Brubaker said he was astounded by the tiny creature’s boundless aggression: “It’s like every time Tom tries to grab its writhing torso, the animal intensifies its attack, tearing and rending at his flesh with razor-like teeth.

“You’d think it would stop after a bit but it’s really tenacious. The term ‘killing machine’ sounds a bit over-dramatic but I’d say it’s appropriate here.

“Wow it’s really freaking out now. It’s little but it’s all muscle. What’s it doing with his ear?