A COUPLE with vague socialist ideas and a fondness for gloomy crime dramas think they are actually becoming Swedish.

Stephen Malley and Eleanor Shaw are convinced that if they wear enough chunky sweaters and eat pickled herring they will be able to grow a new nationality.

Shaw said: “Stephen has got great stubble and our flat is full of stylish minimalist furniture. It’s not from IKEA, we’re not sheep.

“We’ve seen Borgen, The Bridge and The Killing and we’ve got a book about hygge. Being British is dreadful, so we’re hoping that if we spend enough money on stylish lamps and Bjork albums we can become healthy, relaxed people rather than paranoid, fickle middle-class idiots.

“Have we ever been to Scandinavia? No, but my mum went to the Shetland Islands once.”

Swedish person Filip Eklund said: “It’s fucking freezing, it gets dark at two and a beer costs a small fortune because otherwise everyone would become an alcoholic to cope with it.” 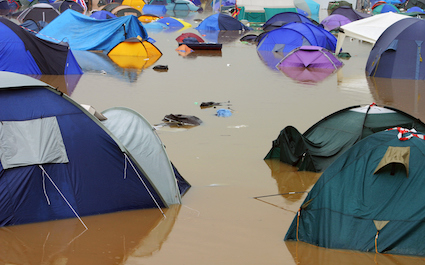 THE best way to impress girls is to claim to have survived one of Britain’s many completely disastrous music festivals, men believe.

Across Britain, men are dazzling whole bars full of girls with grim tales of how they crawled, using a collapsed tent for cover, through 13 miles of mud to escape Derbyshire’s Y Not festival.

Nathan Muir of Harrogate said: “They’re lapping it up.

“The bit where I burst into tears after admitting I never even saw the headliners because I was saving my best friend from a flash flood, I swear that got me three phone numbers.

“When I then claimed to have been at Liverpool’s Hope & Glory, and because of overcrowding had no choice but to watch The Fratellis’ full set causing me long-term psychological damage, wow. I think I could have had them all at once.”

18-year-old Nikki Hollis said: “Tell us again how you faked being a Craig David roadie to get backstage to save a woman’s life.