Jesus tells Archbishop to shut it 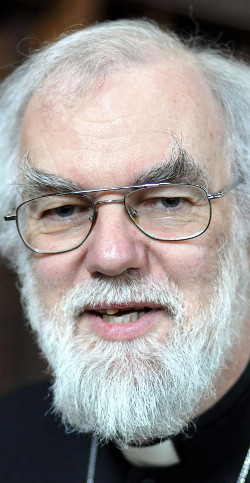 CHRIST the Saviour has told the Archbishop of Canterbury to stop being such a pansy.

The King of Kings told Rowan Williams that the US definitely-not-an-assassination of Bin Laden was way cool and that because he is Jesus he has been allowed to see the photos of Bin Laden dead and they are wicked.

The Messiah said: “I’m aware of what my teachings are in the gospels about pacifism – after all, I did actually say almost half of it.

“But not even the son of God can deny that kicking through a window and saying ‘This one’s for New York City you sonofabitch’, then emptying a clip into a motherfucker would be totally awesome.

“And if Bin Laden had given me any of that ‘turn the other cheek’ shit, I’d have been all like ‘Yeah? Well, turn THIS, you cocksmoker’ and shot him with my gun held sideways like they do in Pulp Fiction.”

Jesus went on to repeatedly ask Williams exactly who had died for whose sins anyway before swiping the mitre from his head and running off with it, saying he could have it back if he told his next congregation how the Lamb Of God had kicked his ass.

He added: “I hope this puts to rest all those doubts people had when George Bush used to say that he was going to war in my name. I love a good ruck as much as the next half-deity and I’m still rather miffed with Paul, Matthew, Luke and the rest of those nonces for not pointing that out.

“Now, if you’ll excuse me, I’ve got to ask a certain Polish somebody a few questions about a load of kids being bummed.”