Public unconcerned that police think they should be in charge

BRITAIN has thrown its support behind the unelected jobsworths who watched London burn for three days, it has emerged.

A series of opinion polls show the public think David Cameron is wrong to tell the police to just do their fucking jobs and that it would be far better if he was replaced by a senior officer in a big, fancy hat.

Cameron has come under fire for hinting that during the first 72 hours of the rioting it seemed that stealing a Blu-Ray player was perfectly legal and that it might now be an idea to get some advice from someone who knows what they are actually doing.

Stephen Malley, from Stevenage, said: “Cameron should shut it. In February my lawnmower was stolen and when the police arrived last week they were absolutely charming.”

But Jane Thompson, professor of freedom and stuff at Roehampton University, said: “You may despise the government but a key element of democracy is that an elected politician has the right to tell a policeman to shut his fucking hole.

“And he also has the right to tell them that if they can’t do their jobs properly he will replace them with Paul Newman from Fort Apache, the Bronx.

“And the fact they object to this so strongly confirms what a collection of arse-covering fucknuggets they really are.”

Meanwhile ACPO president, Sir Hugh Orde, said it was ‘simply stupid’ to have a senior officer who had never taken money from News International or been to Champneys for the Sumatran Herbal Chin Bath.

He added: “And he’s not even British.”

Professor Thompson said the public may be backing the police because they think London had become overrun with plate glass windows.

She added: “Or perhaps they think that somehow the Metropolitan Police will one day protect us from the government. Which, in all fairness, they probably will if the government disguises itself as a newspaper seller, or a Brazilian electrician.” 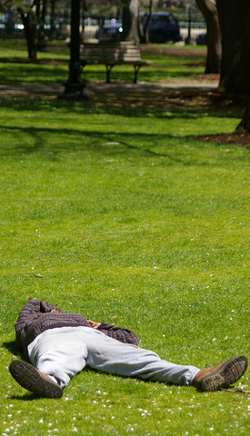 POLICE last night thanked the Premier League for lulling an over-excited Britain back to sleep.

Amid fears that riots could start again as people had time off from the same jobs many of the rioters seem to have, Premier League fixtures were so soporific that radio stations warned not to listen to coverage while operating heavy machinery.

Superintendent Roy Hobbs said: “It’s all been very relaxing and nicely tedious. Torres not scoring, United bagging a late winner and Liverpool being disappoi…ah, you appear to have nodded off.

“We were concerned that Joey Barton having a one-man riot on the pitch might flicker some insurrectionist flame but by now his state of almost-permanent enfunkment has the same soothing effect as the sound of a distant seagull amid the gentle lapping of waves against the shore.

The league was helped by television coverage of the games, which leading footballologists described as high-defintion, surround sound Valium in inexplicably tight, shiny suits.

Ray Wilkins’ voice during Sky’s Sunday coverage did spark a minor panic, as some people called the broadcaster fearing he must have been suffering a series of bereavements while commentating, but by the time the final whistle blew at the Hawthorns most viewers were sleeping like drunk babies.

Meanwhile, the BBC’s persistence with Gary Lineker and Alan Shearer ensured that Match of the Day could stop a Mexican prison riot with a single line of banter about Alan Hansen’s dismay at a poorly organised back four.