'Racist' T-Shirt Could Cause Morons To Say Stuff

A SCOTTISH t-shirt expressing dislike of the England football team could cause morons to say things, experts have warned.

The shirt, which wishes success to 'Anyone But England' in this summer's World Cup, is likely to provoke at least 48 hours of tedious debate about post-devolution British identity and why Scotland needs to grow up.

Experts say the policeman who warned an Aberdeen shopkeeper about displaying the shirt must now take responsibility for the resulting avalanche of bullshit articles and mind-buggering exchanges on Live from Studio Five.

Julian Cook, the Nicky Campbell Professor for the Understanding of Stupid Debates at Reading University, said: "At first you'll get some articles about why the police have to intervene in every single little thing and how this country simply isn't free any more.

"But that will quickly give way to columnists saying 'actually, this incident does raise a serious point about Britain…' when, of course, it doesn't. It just fucking doesn't.

"And by the end of today the BBC will have sent camera crews on to the streets of Glasgow and Coventry to gather up the kind of soul-destroying responses that will lead to yet another traffic spike on French property websites."

He added: "By Friday you may even get a column in the Independent about 'why must the British media analyse absolutely everything?' which will of course be written without even the faintest whiff of self-awareness."

But veteran Daily Telegraph columnist, Denys Hatton, said that while the t-shirt was no doubt meant to be taken in jest, it would inevitably lead to the break up the United Kingdom and generations of blood soaked conflict that will divide families and lay waste to Berwick Upon Tweed.

He added: "When will the prime minister have the guts to accept responsibility for this genocidal 't-shirt' and go back to the land of chippy, drunken, bestial perverts from whence he was puked?" 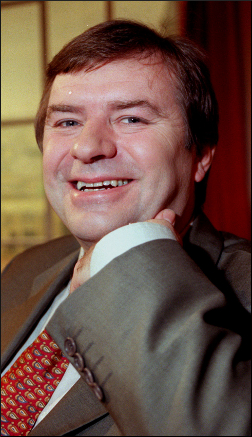 One day Alistair got up and went to work. When he arrived at his desk he saw a note from the governor of the Bank of England saying that absolutely everything had gone wrong and they better have a cup of coffee and a chat.

Alistair went to see the governor who kindly showed him lots of graphs with all the lines going down very steeply. "This is awfully bad" thought Alistair,  "no point in trying to be all cheerful about it."

Later that day Alistair sat down with a nice journalist from a fancy newspaper and told her that absolutely everything had gone wrong and that we were all going to die.

Alistair went to bed that night thinking he had done the right thing and vowed to jolly well try his best not to make all the bad things worse.

But a few hours later, as he lay snuggled up in his favourite pyjamas, Damien McBride and Charlie Whelan kicked Alistair's door in and dragged him screaming from his bed.

After hitting him very hard on the back of the head with a sock full of coins, Damien and Charlie threw Alistair into the back of a van and took him to the prime minister's dungeon.

Alistair used to get on with the prime minister very well, but just lately he had come to realise that he was violently insane.

"Hello Alistair" said the prime minister, "I see you've been talking to the newspapers."

"Yes," said the nervous Alistair, "thought it best to just tell people how terribly bad everything was."

"Well, quite," said the prime minister, thoughtfully, "but you see, the problem with that is I'm now going to have to rip off your testicles with this pair of pliers."

The prime minister, who is always true to his word, then inflicted massive, excruciating pain on Alistair, all the while whistling his favourite tune from the latest Arctic Monkeys album.

When he had finished the prime minster washed all the blood off his hands and went back upstairs as poor Alistair lay on the floor, calling for help and drifting in and out of consciousness.

Alistair didn't really like having his testicles ripped off with pliers, but at least he learned not to say silly things that would get him into trouble.

Until today, that is… Oh Alistair!