ASYLUM seekers must make themselves identifiable by humming Gimme Shelter by The Rolling Stones, ministers have confirmed.

Following failed experiments with wristbands and colour-coded doors, getting refugees to walk around humming the well-known Stones tune is the latest sensitive scheme to distinguish them from the rest of humanity.

A government spokesman said: “It’s appropriate because they do indeed want shelter, and not humiliating because it is a classic rock anthem.

“They need to do something to set themselves apart from everyone, otherwise they might get all mixed up with fully fledged human beings.”

34-year-old refugee Sayid Hussan said: “Apparently I also have to ‘do the dance’. I am doing not the dance, I’m sorry but no way.” 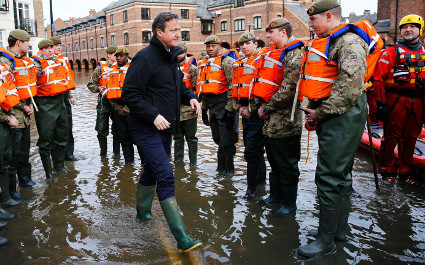 THE prime minister has grudgingly agreed to visit flood victims for one final time, it has emerged.

David Cameron privately responded to news of flooded villages by saying this is the last ever time he’s going to sodding Cumbria.

Exhaling loudly, he said: “Someone fetch my wellies. Not the new ones, the old battered pair.”

He added: “Next time though I’m staying put, it’s fucking perishing up there. Surely we can do this over Skype or something.”

Arranging his latex features into a sympathetic expression, Cameron listened to locals describing how their homes were full of sewage while nodding and thinking about having a nice bit of cod for his dinner.

Cameron said: “We’ve been very understanding but now it’s time for people to buck up and take some personal responsibility for the weather.

“It would be irresponsible to create a dependency culture where people come running for handouts every time a few million gallons of water floods their homes.

“Stop moaning and have a game of Fruit Ninja to take your mind off it. That’s what I’m doing.”