Rescue cat back at cat home under new name

A RESCUE cat has been returned to the animal shelter for his own good, according to the couple who adopted him.

Smudge, a six-year-old grey cat with yellow eyes, was thought to be missing his little pals which is why he bit his new owners, scratched the new leather sofa and used the carpet next to his litter box as a litter box.

Eleanor Shaw of Bolton said: “Smudge seemed a lovely cat at the shelter but once he was at home began to act out his feelings of distress with his claws.

“We did our best to encourage him to go out and meet other cats, often putting him out early in the evening so he’d have more chance to meet some, but his vicious personality seemed to put them off.

“After a month we concluded that what he really wanted was to be with his chums back at the shelter, so we carefully removed his collar and claimed we’d found him lost in the street, using false names as a precaution. 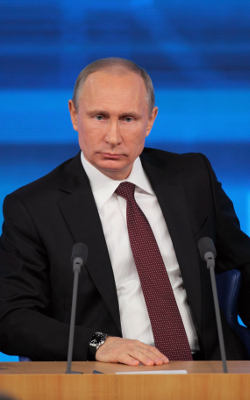 VLADIMIR Putin giggled flirtatiously and batted his eyelashes when compared to Hitler, according to onlookers.

Wondering if he could carry off the moustache

Arriving in Australia for the G20 summit, the Russian president seemed delighted that somebody had finally noticed.

He purred: Me? Like Adolf? No, honestly, you flatter me.

Though I suppose we do both send troops into neighbouring countries without provocation, imprison opponents and persecute homosexuals, so sweet of you to compare us.

Perhaps we could discuss this further over dinner?

David Cameron said: It was just a little offhand remark to get the ball rolling, but the effect on Putin has been electric.

When I got back to my hotel yesterday evening he was in the bath naked with a bowl of strawberries and a magnum of champagne, blowing foam seductively from the tips of his outstretched fingers.

I told him this morning that it was only a one-night thing, but he says he won’t let ‘us’ go without a fight.