Rich people ‘a bunch of freaks’

ALL rich people are total freaks, experts have confirmed.

The findings were revealed on the same day that a very weird court case heard how Charles Saatchi, the Damien Hirst-enabling throat-grabber, keeps his money in the fridge.

Professor Henry Brubaker, of the Institute for Studies, said: We used to believe rich people weirdness was centred around Scientology, but thanks to advances in actually realising things, we can now see that they are all oddballs.

The Beckhams have spent £45 million on a house that will, apparently, contain a room that is just for shoes. It doesnt matter if the shoes are arranged neatly on shelves or theres just a huge pile of shoes in the middle of the floor. Both scenarios are really weird.

Then theres all the panthers. If you walk into someones living room and see a panther the temptation is to think, what an ostentatious display of wealth when you should actually be thinking, buying a panther is an incredibly strange way to behave.

Meanwhile, a huge number of rich people are determined to make their faces extremely unusual. They’re saying, in case you thought I was normal, have a look at this.

Professor Brubaker said the Institute would now explore which came first, the money or the weirdness. Does money make you weird, or does it merely write a blank cheque for pre-existing oddness?

He added: As for Nigella Lawson, the BBC has to show her programmes after 8pm so youre just that little bit too tired to notice how deeply unusual it is.

Tape one and then watch it mid-morning and you get the overwhelming sense that it was made by a cult.

The Institute is also working on the theory that the most money anyone should have is £650,000.

83% of Monocle readers still live with their mum 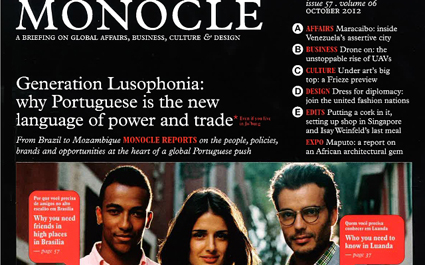 MOST people who read Monocle magazine are still based in their childhood bedroom, it has emerged.

New research found that 83% of subscribers to the global lifestyle journal live in their mum’s house. In most case their mum also does their washing for them.

28-year-old Wayne Hayes said: “It’s vital that I keep abreast of business and cultural trends, as well as fancy hotels that have record players in the rooms, because I’ve got an interview at Carphone Warehouse soon and they might ask me about that stuff.

By comparison, 81% of Esquire readers magazine live with their parents.