A COUPLE who thought giving each other massages would be ‘sexy’ have been left traumatised by the experience.

Nathan Muir and his girlfriend Emma Bradshaw enjoyed a romantic evening and a candlelit dinner, but things took a darker turn when they retired to the bedroom for a sensual back rub.

Bradshaw said: “Obviously I’ve seen Nathan naked loads and had sex with him and everything, but I’ve never seen him splayed out on the bed like a flaccid white dolphin before.

“Also, there’s seems to be something about massage oil that really highlights the amount of hair on someone’s body, and the weird places they have it. He looked like a wet, balding gorilla by the end.”

Muir said: “By the time she’d finished I felt thoroughly dehumanised. I gave her a cursory rubdown in return, then we went and watched telly in silence for several hours.”

He added: “We will never speak of it again.”

Neighbours invited to party on condition they don’t come 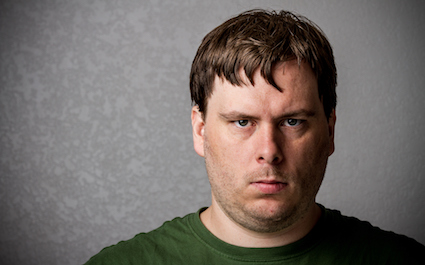 A MAN has invited his next-door neighbours to a party he is holding tomorrow night on condition that they do not attend.

Wayne Hayes of Warrington, who has previously only spoken to his neighbours when picking up parcels, asked them to the party solely to forestall noise complaints while making it clear they are not in the least welcome.

He said: “Yeah, we’re having a bit of a party tomorrow night, probably go on until pretty late, don’t want any bullshit about the music so we’re issuing invites that should in no way be taken up.

“I mean it’d be a party full of complete strangers refusing to pass you spliffs and completely ignoring you, so if you actually did want to come you’d hate it, and we’d hate you, even if anyone answered the door.

“By about 2am we’ll be in the garden singing drunkenly along to the same Oasis song again and again and playing a game where we smash bottles against a wall while laughing hysterically, but you can’t call the police because technically you were invited.

“So yeah, basically I’m having a party, this invite means you rescind all rights to criticise it in any way, do not come. Great talking to you.”