Royal baby born on St George's Day to be England's saviour, if it's a boy

THE new Royal baby born on St George’s Day will be possessed with the spirit of King Arthur and is fated to save England, unless it turns out to be a girl.

Nationalists believe that the baby, born on the dragonslayer’s sacred day, is destined to become either a great leader who will conquer the whole of Europe by fire and sword or a princess.

Patriot Stephen Malley said: “He will emerge from his mother with a St George’s cross birthmark on his face, marked by Albion.

“As he grows he will prove himself a master swordfighter, a skilful tactician, and a boy who refuses to accept that we are a second-class nation, swearing to restore our country to greatness.

“Accepting the sword Excalibur, by his 16th birthday he shall ride up and down Britain to form a great army of true patriots, leading them through the Chunnel to lay waste to the EU and force its leaders to declare fealty to him in perpetuity.

“Then we’ll start building the fleet.”

He added: “A girl couldn’t do that. Come on, this isn’t Game of Thrones. You need to get out of your fantasy land.”

Wenger agrees to leave Arsenal in 2005 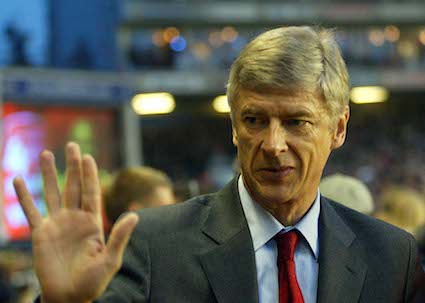 ARSENAL has confirmed Arsene Wenger will officially leave the club 13 years ago.

Gunners CEO Ivan Gazidis confirmed that Wenger’s last game in charge was the victorious 2005 FA Cup final, meaning that he leaves on a high, and his reputation untarnished by a subsequent decade of false starts and failure.

Gazidis said: “In his nine years in charge here, Arsene has proved himself to be the greatest manager in our club’s history. He leaves us in a strong position, with a world-class squad full of legends like Thierry Henry and Patrick Vieria, and exciting youngsters like Cesc Fabregas and Robin van Persie.

“By leaving when he did, he bears no responsibility for the next decade-plus of complacency and poor investment, which we are choosing to blame on his successor for the 2005-06 season, David Moyes.”

Arsenal fans praised the timing of Wenger’s decision to walk away.

Season-ticket holder Roy Hobbs said: “A part of me wishes he’d stayed around after 2005, instead of the absolute clowns we had in charge over that time. Just imagine how many more trophies we’d have won if we’d stuck with Wenger.”

Hobbs added that with the club looking to hire a new manager this summer, they should consider bringing back Arsene Wenger.