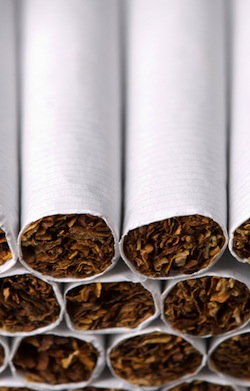 COLOURFUL cigarette packets are more addictive than their contents, experts have warned.

As the government shelved plans to introduce plain packaging, researchers said the packets were ‘easily the most dangerous thing’ about cigarettes and that children see them as the ‘ultimate source of joy’.

Professor Henry Brubaker, of the Institute for Studies, said: “The only reason young people buy cigarettes is because of the insanely fancy colours and hypnotic shapes.

“Most of them just throw the cigarettes away.”

He added: “To a child, the triangles on a box of Marlboros are more magical than a golden ticket to the Wonka factory.”

Kyle Stephenson, a 14 year-old from Doncaster, said: “I think they cram too many cigarettes into the box. They might damage it.”

His friend Wayne Hayes, said: “I have more than 2000 cigarette packets. I raid bins to feed my habit.

“My favourite is an old Camel Lights box. It’s pale blue and has a really nice picture of a camel on it. I like camels.

“However, smoke-wise I prefer psychotic amounts of Bulgarian skunk.”

A spokesman for campaign group, Smoking is Just Awful, said: “We asked more than 500 lovely little children if the packets made them attracted to smoking and then we asked the ones who said ‘yes’ and discovered that 100% of those children agreed with us.

“These figures are deeply troubling. And yet you sit there and do nothing.”